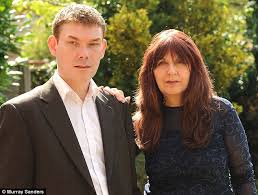 THE mother of computer hacker Gary McKinnon has been nominated for a human rights award after battling for ten years to prevent her son from being extradited to America. Janis Sharp, 62, from Potters Bar, said she was delighted to have been shortlisted by the campaign group Liberty for an award. Her 45-year-old son admitted hacking into 97 Pentagon and Nasa computers in 2001 and 2002 and American prosecutors want to see him brought to the US under the controversial US/UK 2003 extradition treaty so he can face terrorism charges.

Mr McKinnon, who suffers from Asperger’s syndrome, says he was merely looking for evidence of UFOs but if convicted, he could spend 60 years in an American jail. Mrs Sharp said: “I don’t know who nominated me. I really don’t expect to win, I am not a competitive person but I think it is good to be shortlisted because it means that Gary’s case and the extradition treaty will be highlighted. I was completely surprised, I had no idea that this was coming.”

She has been recognised for highlighting the flaws in the treaty, which critics say favour the Americans. Mrs Sharp said the law gives an unfair advantage to the US authorities, who, unlike the British, do not have to provide evidence that a crime has been committed before someone can be extradited. Lawyers acting for Mr McKinnon, who is said to be suicidal, said extraditing him would be a breach of the Human Rights Act. Mrs Sharp and her son are currently waiting for the Home Secretary Theresa May to decide whether to block the extradition. Mrs May said she is weighing up the evidence, including medical evidence surrounding his mental health.

The winners of Liberty’s Human Rights awards are scheduled to be announced at a ceremony next month. Email: mary.mcconnell@nlhnews.co.uk 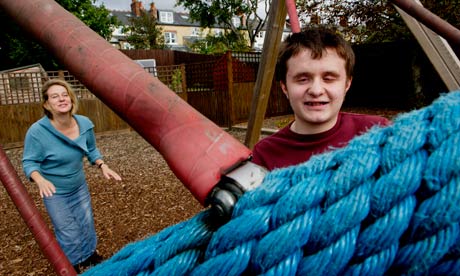 Autistic teenagers like Danny Hornby have nowhere to go when they leave school. A new campaign hopes to develop post-19 services that open up life chances and opportunities for all.

Virginia Bovell and her son Danny Hornby at the Treehouse school in North London Photograph: Sarah Lee for the Guardian

When Virginia Bovell realised there were no schools offering the intensive support that doctors said her three-year-old autistic son needed back in 1997, she got together with four other families and set up a specialist school offering intensive, autism-specific teaching.

Fourteen years later Treehouse, the school they created in north London, is recognised internationally as a model for how children with autism should be taught.

But Bovell has recently found herself confronted with a new challenge.

Her son Danny, now 18, is on the brink of leaving school and she has been searching for a suitable place for him to continue his education. Dismayed at the quality of what’s on offer for children with autism after school, once again she has joined forces with other parents to campaign for radical improvement.

A report published next week by Ambitious About Autism, the charity aligned to Treehouse school, reveals that only 19% of children with autism continue with any kind of education after they leave school, and concludes that this is because there are so few colleges equipped to accommodate them. About 85% of adults with autism are unemployed.

The report, Finished at School: What Next for Young People with Autism? says: “Families often feel there is nowhere for young people with autism to go once they have finished at school.”

Most autistic children are faced with what Bovell describes as premature “retirement” in their late teens, with the option of living at home with their parents for the rest of their life, going to live in a residential community (of which there are very few), or spending time at daycare centres, often full of people who are two or three times their age.

Without continued support, the skills that children have been taught can be lost, leading to a “huge waste of funds”, the charity states.

“Dedicated teaching staff say that one of the saddest, most frustrating aspects of their job is that they put in all this effort and see all this progress for a young person at school and then find it totally heartbreaking to see that nothing was available afterwards,” Bovell says.

Although their campaign focuses on improving opportunities for young people with autism, the charity’s findings will resonate with parents of children with other disabilities, who often find that state support throughout childhood is replaced by a black hole once they reach 16.

“For young people with autism, school is all too often the end of their education,” writes Robert Buckland, the Conservative MP for Swindon South who sits on the all-party parliamentary group on autism, in a foreword to the charity’s report. “By failing to support young people to continu e learning beyond school, we create a barrier to them living more independently and gaining employment. This ends up creating large long-term costs to society.”

Adult social care services face increased costs “due to our failure to support young people to live in their community and contribute to society,” the report argues. The annual cost of supporting people with autism in the UK is estimated to be £27.5bn, the report says.

Bovell’s new campaign is significant because the work she and other parents (including her ex-husband and Danny’s father, the novelist Nick Hornby) did to improve services for children with autism had a profound impact on expectations nationally, showcasing what was possible and encouraging parents to demand more from their local authorities.

Three years ago, a permanent complex of beautifully-designed school buildings was opened for Treehouse, complete with specialist playground equipment, music rooms and facilities for teaching children to cook and live independent lives. Over the past decade there has been greater recognition that autism, which is a lifelong neurological condition, affects a larger number of people than was previously accepted. Despite this, local authorities have not responded to the growing need.

“When we were starting, one of the reasons there was very little provision was that people were still working on a prevalence rate of four or five per 10,000, now it’s widely recognised that the autism spectrum affects 1% [of children],” Bovell says.

“No one knows whether this is just to do with improved diagnosis or an actual increase in prevalence. But autism is no longer a very, very low incidence condition which we can ignore. There need to be more services. Campaigners have been talking about a ticking timebomb for some time, pointing out that if there are this number of children coming through education, when are adult services going to wake up?”

The charity is developing plans with a number of further education colleges to support young people with autism to continue their education. There is no autism-specific college in London and the charity wants to change that.

“You can make a national difference through your own school, if you are putting up a template to illustrate what others can be doing as well. What we’ve done here has been codified and replicated elsewhere. We want to do the same in further education,” Bovell says. “It has to be replicable. We are trying to change the environment for all young people with autism wherever they live.”

The government’s green paper on special educational needs published earlier this year offered a proposal to extend support for disabled young people up to the age of 25, and the Ambitious About Autism campaign wants the government to create a legal right to educational support up to the age of 25. However, there is growing pessimism about this ever becoming policy, given the current pressure on public finances.

As a parent, Bovell says she worries endlessly about the opportunities that will be available to her son once he leaves school. “At the extreme end, you hear of adults going on living with their parents for the rest of their parents’ lives because there is no alternative. When their parents die, maybe in their 80s, leaving their child in their 50s or 60s, there is an emergency. It is an emotional catastrophe and suddenly the whole world falls apart, and they go into residential care. That is a nightmare prospect for everyone involved,” she says.

“At the other end of the spectrum, the only option is long-term residential care post-school and that doesn’t seem right either. They have had this chance to do learning and then suddenly they turn 18, they are watching television all day, with nothing much happening, often with people three times their age.”

She is hopeful that Ambitious About Autism’s campaign will help improve the prospects for young adults with autism.

“People with severe learning difficulties have stayed at home or been institutionalised for decades,” she says. “I’d hope that through the post-19 services that we aspire to develop that things will get better, that outcomes, prospects, life chances, won’t be falling off a cliff, going backwards, at the age of 19, and that things will be a lot more hopeful from now on.”