Low birth weight is a contributory environmental factor to the risk of autism spectrum disorder (ASD), a new study suggests.

Studying discordant twins -twins where only one has ASD- it was found that birth weight was a “very strong predictor” of autism spectrum disorder, lead author of the study Molly Losh explained.

Previously it was found that when one identical twin has ASD the other is more likely to have it as well.

However, this study shows that when only one twin is affected, environmental factors play a role either independently or in conjunction with autism.

A previous study believed that pregnancy and birth experience are also environmental factors effecting the development of autism. 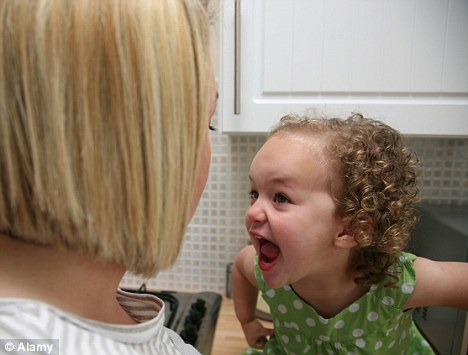 Simply eating more healthily can improve the behavior of children with attention deficit hyperactivity disorder if therapy and medication fails to work, a study has revealed.

Researchers said that there was conflicting evidence on the impact of supplements and restricted diets for people suffering from ADHD – and in some cases they were no better than the placebo effect.

The report, by doctors at Northwestern University Medical School in Chicago, argued nutritional intervention should therefore be considered as a secondary approach to treating the condition.

Healthy option: Eating a balanced diet could help improve the behaviour of children with ADHD if they don’t respond to therapy or drug treatment, a study has found (file picture)

It said: ‘Supplemental diet therapy is simple, relatively inexpensive, and more acceptable to patient and parent.

‘Public education regarding a healthy diet pattern and lifestyle to prevent or control ADHD may have greater long-term success.’

Three to five per cent of U.S. schoolchildren – around 5million youths – are diagnosed with ADHD. Symptoms include hyperactive behaviour, inability to pay attention and impulsivity.

It is often treated with stimulant medications, including the controversial Ritalin drug.

The causes of the condition are unknown, although studies have pointed to hereditary factors as well as social and environmental influences. Eating high-sugar and high-fat foods are also thought to exacerbate the symptoms. 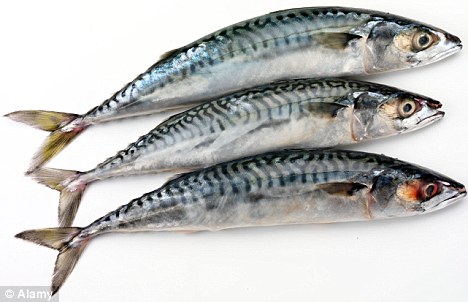 Healthy diet: Mackerel fish, rich in omega 3 oils. The study has found conflicting evidence of the success of dietary supplements for children with ADHD

Interventions including giving iron supplements or cutting out additives and food dyes have soared in popularity in recent years, but the study says there is little evidence to back these claims.

For many parents, simply paying more attention to feeding their children a healthy diet rich in fish, vegetables, fruit, legumes and whole-grains is likely to help, the study said.

‘A greater attention to the education of parents and children in a healthy dietary pattern, omitting items shown to predispose to ADHD, is perhaps the most promising and practical complementary or alternative treatment of ADHD,’ it added.

Andrew Adesman, chief of developmental and behavioural pediatrics at Steven and Alexandra Cohen Children’s Medical Center in New York, said: ‘We have more questions than answers.

‘It is unfortunate that more research is not being done to examine the role of dietary interventions for the treatment of ADHD.

‘Since some of these nutritional interventions cannot be parented, drug companies are not willing to underwrite the costs of the needed research.’ 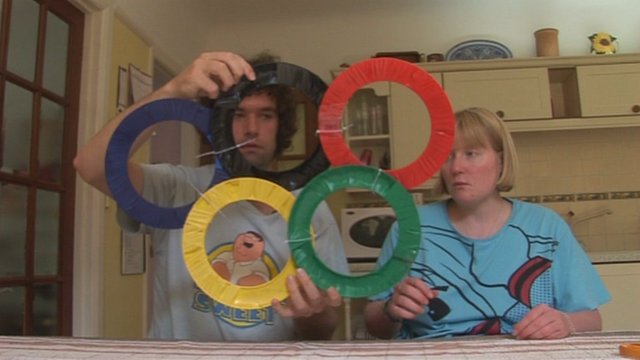 In the world of Asperger syndrome, Victoria Harris is a success story with a job and a long-term relationship.

She is among just 12% of people with the condition currently employed in Britain, according to the National Autistic Society.

Asperger’s can cause behavioural and social difficulties often meaning it is hard to find work and sustain relationships.

But Miss Harris, from Weymouth in Dorset, has now been going out with her boyfriend Matt Dale, who has Tourette syndrome and obsessive-compulsive disorder, for four years.

She believes it was only down to being diagnosed at a young age that she was given the support she needed.

“I think it is a problem [nowadays] that a lot of people are having with the condition. 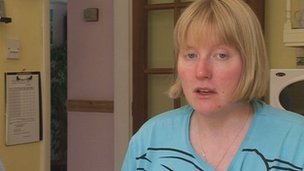 “Councils are finding money tight, especially at the moment, so getting a diagnosis is like getting blood out of a stone.”

But life is going well for Miss Harris and, along with her partner, she recently took part in the Weymouth Carnival parading in front of 100,000 people.

“I can imagine a lot of people with Asperger’s finding the number of people, the fact it is such a chaotic environment and being quite bothered by it,” Miss Harris said.

But in Olympic-themed fancy dress outfits they waved to the crowd and collected donations as they walked the route.

The pair are highlighting the condition as part of a BBC South series into people with high-functioning autism and Asperger syndrome.

They said they had learned to deal with each other’s conditions over the years.

Mr Dale said: “We work together with our conditions and it seems to work out really nice.

“When we are out and about we just walk around hand-in-hand and no-one takes no notice, they don’t really know anything at all. 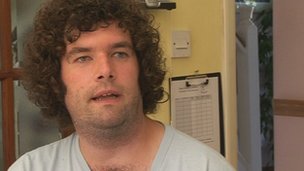 Mr Dale said they work together to deal with their conditions

“You may get the odd few people who may look at you a bit strangely, but most of them don’t.”

Miss Harris was diagnosed at a young age and found it hard to make friends at school.

“Being an introvert condition you end up thinking solely about yourself.

“At that age I didn’t see friends as an important thing to keep,” she added.

But she now has a part-time job at a Tesco store and is in a steady relationship.

“I’ve been [lucky] to have been able to have both of my parents living with me and that definitely makes me feel happy,” she said.

A few facts about Autism

Autism is a serious and lifelong developmental disability. On its own, autism is not a learning disability or a mental health problem.

People with autism usually have difficulties with:

However, some people with autism have an accompanying learning disability, learning difficulty or mental health problem.

Autism is a spectrum condition. This means that while all people with autism share certain difficulties, the condition affects them differently.

Perhaps the best known form of autism is Asperger syndrome. People with Asperger syndrome are often of average or above-average intelligence. They have fewer problems with speech than people with other types of autism, but may find it difficult to understand and process language.

While some people with autism live independent lives, others may need a lifetime of specialist support. Autism can have a profound and sometimes devastating effect on individuals and families. But getting the right support makes a positive difference to the person who is diagnosed and their loved ones.

There are over half a million people with autism in the UK. That’s one person in every 100. If you include their families, autism touches the lives of over two million people every day.

The causes of autism are still being investigated. According to the National Autistic Society (NAS), there is strong evidence to suggest that autism can be caused by a variety of physical factors, all of which affect brain development There is also evidence, says the NAS, to suggest that genetic factors are responsible for some forms of autism.

Autism is not caused by a person’s upbringing and is not the fault of the individual with the condition.

There is no cure for autism. However, there are a range of interventions (learning and development techniques) that people may find helpful.

How does autism affect people?

Autism affects the way a person communicates with, and relates to, other people. It also affects how they make sense of the world around them.

Everyday life for people with autism can be confusing, frightening and lack meaning. People with autism often find understanding and communicating with others particularly difficult, which can leave them feeling isolated.

People with autism may also experience some form of sensory sensitivity or lack of sensitivity, for example to sound, touch, taste, smell, lights or colour.

The triad of impairments

People with autism share three main areas of difficulty, which are sometimes called the triad of impairments.

Difficulty with social communication
People with autism have difficulty using and understanding verbal and non-verbal language, such as gestures, facial expressions and tone of voice, as well as jokes and sarcasm. Some people with autism might not speak or have fairly limited speech. They may understand what people say to them but prefer to use alternative forms of communication, such as sign language.

Difficulty with social interaction
People with autism have difficulty recognising and understanding people’s feelings and managing their own feelings. They may, for example, stand too close to another person, prefer to be alone, behave inappropriately and may not seek comfort from another person. This can make it hard for them to make friends.

Other related characteristics of autism are:

Love of routines
The world can seem an unpredictable and confusing place to people with autism, which is why they often feel more comfortable with a fixed daily routine so that they know what’s going to happen each day.

Special interests
Many people with autism have intense special interests, often from a young age. These can be anything from art or music to trains and computers.

Where can I get more information?

Go to Useful links to find more information about autism and for sources of help and support. 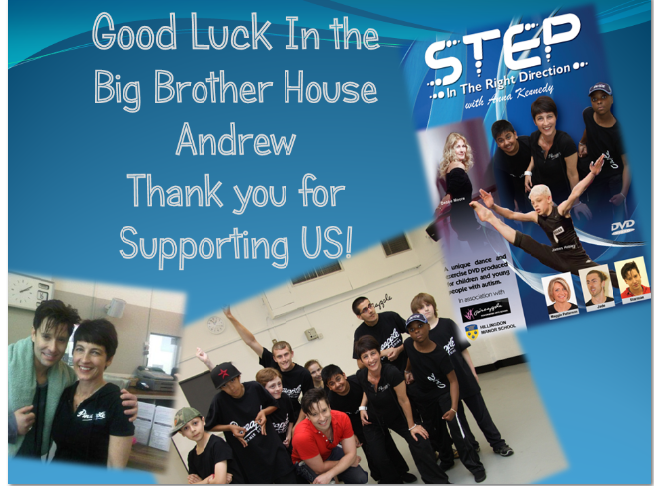 What can dance give you?
…
AS: It’s the best gift in the world to be able to get up and dance because it’s the best gym. You artistically stretch your brain and you physically stretch your body to a higher point than a singular rotation movement like running. It makes your whole body move in lots of different ways, and it can make you very flexible as well, which is good for later life.

I naturally find that I want to stand up straight. An open chest gives you very positive body language. If you need to give a good impression, such as in an interview, then you need to present yourself well. It gives you that physical positivity.

What sort of skills can you learn from dance?

AS: Dance is great for developing communication skills. We do a lot of talking with our mouths, but we don’t necessarily realise the signals we give out physically with our body posture when we’re talking to people.

You will never see a dancer standing with their shoulders hunched or their arms crossed. They will always have a very open, positive posture. That’s good and it can even rub off on other people’s moods.

What wider skills can you gain from dance?

I’ve always been a performer and always will be. Dance allows confidence to grow and inhibitions to fall away, and I pride myself on building people’s confidence.

After a dance class you feel amazing because you’ve done your exercise. Dance releases endorphin chemicals into your brain and makes you feel alive and wanting to get on with the rest of your day. That positivity can help you to communicate better with other people because it gives you a much better mind set. Socially it brings you together with people.

Dance also improves your ability to concentrate because your brain has to work in so many ways. You’re being stretched physically and mentally. You’ve got to focus on the steps and you have to communicate and interact with people.

That is why we go and watch people such as the comedian Lee Evans. No matter how funny he is, he’s a great communicator. When you see the way he moves on stage and how he sweats, as a dancer I can relate to him. He communicates with his whole body.

”Step in the right direction”