An inspector calls. Again. But are they improving SEND provision? 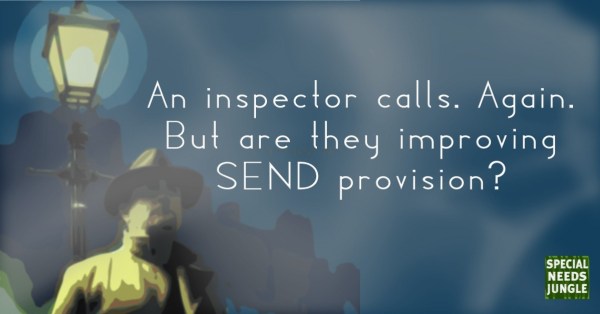 Just under three years ago, inspectors from Ofsted and the Care Quality Commission began checking up on England’s SEND services.

The original plan was a one-shot gig – inspect SEND services in each of England’s 152 ‘local areas’ (that’s the local authority, plus the NHS commissioning groups that work within it), check to make sure the 2014 SEND reforms were being implemented effectively, and wrap the job up in 2021.

Plans don’t often survive reality unscathed, and that’s what’s happened here. The powers that be who commissioned and designed these inspections didn’t anticipate the scale of underperformance in local area SEND services.

Where are we now?

We’re now just over halfway through the inspections – check out the infographics for more detail, and to see what’s happened in your local area and region. But here’s how things stand in mid-March 2019: 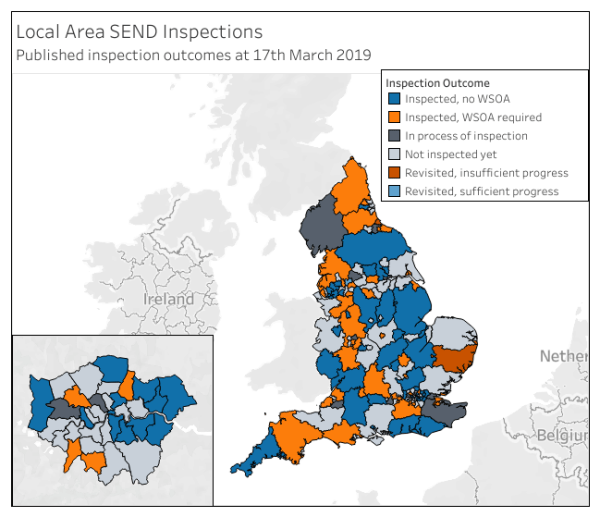 Find the interactive version of the map here

There’s also a disparity in outcomes by region: London and the East Midlands have performed relatively well in these inspections, but outcomes in Yorkshire and the North East have been much poorer. Again, it’s not exactly clear why, but it’s notable that many inspections in the North have been led by Ofsted’s most experienced & capable SEND specialists.

So what happens when a local area is told to submit a written statement of action? We’ve covered this in a previous SNJ article, but here’s how it works: 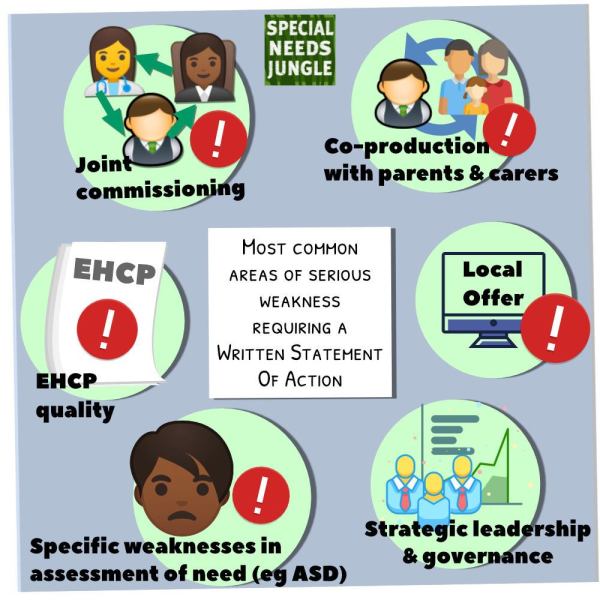 In their outcome letter, the inspectors will have identified several areas where they feel serious improvement is needed. For each of these areas, the local area writes a draft plan outlining:

All fine: but someone has to make sure that the local area is delivering on the plan, and the original arrangements for that were pretty hazy. The architects probably anticipated that this would be an occasional outcome – not something that would end up being needed for half of England’s local areas.

So the task of making sure the local area was getting its house in order was largely left to a roving band of DfE & NHS consultants – in some cases, the same consultants who had reported no serious problems with the local area prior to the inspection.

There were clear problems emerging with this gossamer-thin monitoring process. So in July 2018, the Department for Education announced two things:

Ofsted & CQC set about designing a monitoring process in the autumn of 2018, and what emerged was a system of ‘re-visits’. You can find the full re-visit framework here, but here’s how it works:

So how do parents fit into this? If you’re a parent or carer, there are several ways you can get involved: a meeting organised with the parent carer forum (PCF), an open meeting, and an online survey that opens a week before the re-visit. This looks similar to the process used for the full-fat inspections – it’s somewhat creaky, and parents need to be alert to get involved.

Also, bear in mind that inspectors will be mostly focusing on the weaknesses that they identified first time round. If you’ve got fresh evidence showing other parts of the local area’s SEND service running smoothly or diabolically, then inspectors will take it on board – but they’re unlikely to take immediate action on it.

Re-Visits: The Story So Far

It’s still early days for these re-visits – as far as we can tell, there have been four to date (Rochdale, Hartlepool, Suffolk and Dorset) and two more are happening this week (Sandwell and Surrey).

Rochdale was the first local area re-visited. Inspectors gave the local area a generally clean bill of health, reporting that Rochdale had made sufficient progress across their four areas of serious weakness; they recommended that Rochdale no longer needed regular monitoring visits to keep them on track.

Things aren’t so rosy-looking in Suffolk. Inspectors re-visited in January, examining four specific areas of serious weakness. They found that Suffolk had made sufficient progress on one of the four areas, but reported that Suffolk hadn’t made sufficient progress across three of them: too many EHCPs were still weak, the local offer and CAMHS mental health service were still in disarray, and efforts to improve joint working were still underdeveloped.

From the report, it looks like evidence from Suffolk parents was taken seriously: over 700 parents and carers provided evidence via an online survey and through SPCN, Suffolk’s formidable parent carer forum.

Last week, Ofsted & CQC reported on their January re-visit to Hartlepool, with a similar story – some progress made, but the quality of Hartlepool EHCPs remained too variable, and joint commissioning of education and health remained too weak.

So what happens if a local area ‘fails’ one of these re-visits? We don’t know – but the little we do know makes us uneasy.

At this point, there’s no road-map. The only thing that’s clear is that the accountability ball gets passed back to central government. The Department for Education and NHS England decide what happens next. The inspectors trudge off stage-left, only to reappear if Whitehall summons them back again.

In theory, the Department for Education could use Ministerial powers of intervention to impose a new setup via statutory direction. They could issue a non-statutory improvement notice, beefing up the DfE’s existing monitoring and oversight arrangements. Or, of course, they could do nothing of consequence.

And at this point, there’s a real risk that the accountability process will move behind closed doors in Whitehall, with parents and local front-line professionals shut out.

Suffolk local area SEND leaders have already been summoned to a meeting with DfE and NHS England personnel to discuss next steps. Suffolk parents asked to attend this meeting. They’ve been shut out – they’re not even allowed to attend the meeting as observers, let alone as full participants.

The determination of Whitehall civil servants to shut parents out of this critical process tells you a great deal about their real commitment to co-production. Co-production is something other people should do, must do. Ministers, civil servants, and consultants give fine speeches about it. But it’s not for them. It’s for the little people.

Somewhere, hidden in the wings of this two-year bureaucratic clown show, there are children and young people with SEND who need proper provision, and they need it now. And they need the full participation of parents and carers in the process of making things better.

Does any of this make a difference?

We call this site Special Needs Jungle for a reason, and this is a part of the SEND jungle that’s particularly dense and impenetrable. Understanding this part of the jungle matters. People in positions of power and influence are making important decisions off the back of what these inspections reveal or fail to reveal.

And after a frustratingly complacent and inconsistent first year, many of these inspections are now unearthing hard truth about how SEND services work at local area level. The process is now overseen by specialist inspectors who genuinely ‘get it’. But this is a problem that boils down to a simple question – will these inspections actually improve things for children and young people with SEND?

The answer’s mixed. The local area SEND inspections often focus on strategy and process flow, and sometimes that makes improvements hard to see at an individual level – particularly those that are happening slowly behind the scenes. But there’s a limit to what these inspections can achieve. 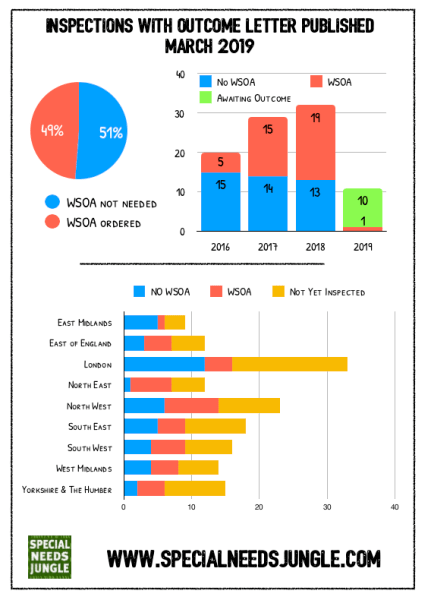 Inspectors aren’t regulators – they’re there to see how effectively local areas are implementing the SEND reforms. They don’t have a direct remit to hold your local area to account for its failure to act lawfully.

Unbelievably, four-and-a-half years after the SEND reforms began, with evidence of failure now visible from space, with serial unlawful behaviour stretching back decades, this sector still has no regulator.These inspections aren’t a fix for that. Parents are still going to need to rely on the SENDIST Tribunal, the Local Government & Social Care Ombudsman, and even judicial review to secure their children’s educational rights.

These inspections also don’t touch SEND funding, which is in national meltdown. The Suffolk re-visit failed to report on the near-total breakdown of mainstream high-needs SEND funding arrangements in the local area, caused by a mixture of national shortage and local incompetence.

And ultimately, inspections also don’t happen frequently enough to embed changes in local area organisational behaviour – which is still shocking in many local areas lucky enough to be in the first wave of complacent inspections. Talk to families in places like Derbyshire, East Sussex, Hertfordshire, Northamptonshire & Trafford – who all ‘passed’ in 2016 and 2017 – and you’ll hear cases of appallingly unlawful behaviour. These local areas won’t be reinspected for at least two, possibly three years. No real improvement’s likely there for years.

These inspections are now a lot better than nothing – but inspectors are working within the limits of the powers they have. And for the worst areas, the ultimate power to drive improvement lies with the Department for Education and NHS England – and they don’t appear to want parents and carers involved.

As appalling as it is, it’s still up to parents to make SEND accountability happen.

Who’s next for a re-visit?