Alongside the daily challenges faced by a family affected by autism many families experience a great deal of stigmatisation and disapproval from the Asian community, who have often been quick to judge and form opinions based on misconceptions and ignorance and having little or no knowledge .

Anna Kennedy OBE Autism Campaigner throughout the years has spoken to many families who are experiencing  Cultural stigmatisation and this is unnecessary family pressure and an additional strain placed on parents that is unjustified and unfair.

Recently at an event of 150 women from the Asian Community Anna asked if anyone in the audience had a family member diagnosed with autism. Not one person raised their hand. Later on in the evening 8 parents approached Anna and her team at the event highlighting they were parents and struggling and felt that they could not speak in front of the group for the fear of stigmatisation.

Mala Thapar Charity Champion from AnnaKennedyonline and mum to Arun who has a diagnosis of autism shares “It’s so important to reach out to the Asian community to recognise and accept all the challenges and inspiration that a child with Autism can bring to your life.

There are families out there that do not know what to do and whom to contact, this will give them the opportunity and also to educate the community rather than ignore this. There has to be a much better understanding of Autism and to learn about it, embrace it and perceive this as a positive. Since being part of the Charity Anna Kennedy Online I now feel part of a supportive network. 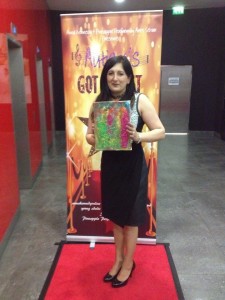 Mala shares since my son was diagnosed with Autism and subsequently myself being very vocal about Autism after meeting with Anna Kennedy, it was very difficult and astonishing to experience the negative attitudes, ostracization and ignorance from a society and culture that were meant to be supportive.

Almost overnight those whom I thought would stand by us, disappeared, and suddenly no longer existed and realised that sadly, due to the mentality and lack of understanding about Autism as being a hidden disability became an impossible hurdle and breaking away led to a huge relief. Through these experiences, we have learnt to live a different way of life and feel that there should be much more awareness surrounding mental health and disabilities within ethnic minorities.

Many parents from various backgrounds have contacted AKO and by reaching out could open up a whole new chapter and meet a new network of people that understand.

Tally Nothey parent of Taran also shares ‘Life for a child with any disability can be demanding on so many levels, but I’ve discovered that some of the most difficult and challenging aspects come from the people who should be offering support and love unconditionally.  And that’s family and community.

I have been blessed with the most understanding and supportive family who love my son who has Autism and my daughter equally, but I have also witnessed prejudice, a lack of understanding and awareness of autism within society.  Many Asian people with a disability are treated as second-class citizens by their own families. They are hidden away from society, ashamed of the stigma.

On many occasions, my son’s Autism has been described as ‘a punishment for something I had done in my previous life’ How can anyone argue with someone who holds such ridiculous views in this day and age?

I am so proud that as part of the Anna Kennedy Online Team as a charity we believe that all people, regardless of disability, deserve the opportunity for a full life in their community where they can live, learn, work and play alongside each other throughout their lives and one day remove disability stigma and this culture of shame’.

Anna Kennedy  says a few years ago I spoke to a mum from Pakistan who was so inspired and felt empowered after speaking to Anna she qualified as a Speech and Language therapist and set up a classroom for children on the Spectrum, instead of hiding her child as her husband demanded.

There is nothing to be ashamed of being a parent of a child on the spectrum . My sons have taught me so much and given me strength and skills that I never even knew I had within me.

Please get in touch with us at Anna Kennedy Online and always remember you are not alone and we are a Charity that care.