Alton Anderson Reports for Blacknews.UK On the Send Review, has your disabled child been falling behind due to SEND? or has your child been continuously misdiagnosed as having behavioural problems due to SEND?

This Is Urgent!!!! Black News UK and the Government want you to have your say on the “send green paper? then join the e-consultation, have your say now, hold your school, council, and government to account, be part of the change you want to see!

Anna Kennedy Online have created a survey and we must hear your views.
Please click here to complete this brief survey and share with it your friends and family. 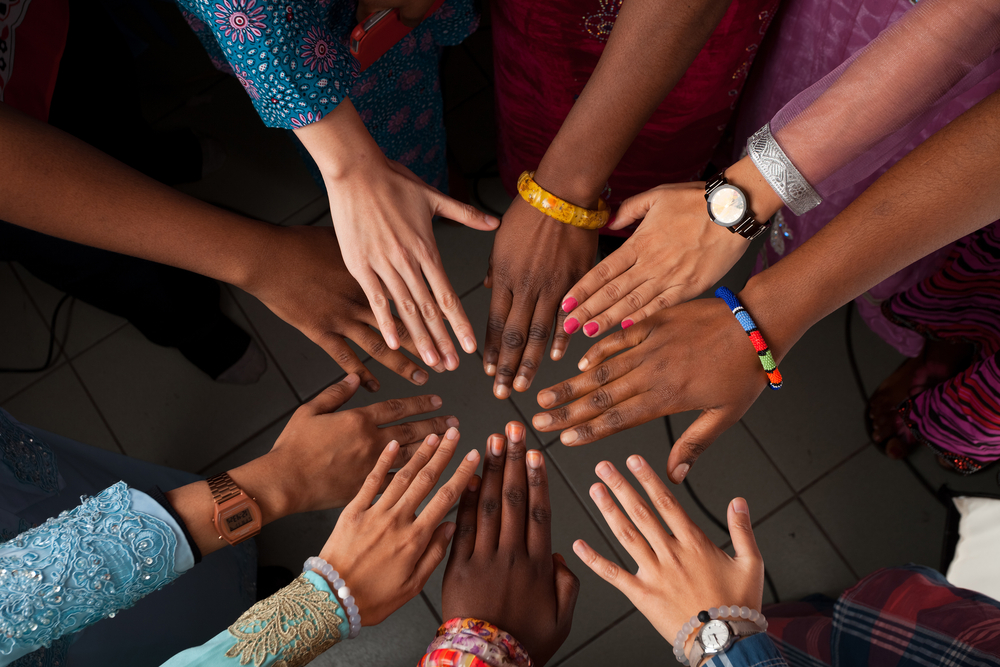 ‘Race’ and ethnicity continue to be major factors influencing children’s and adults’ experiences of education at all levels and in a variety of respects. These include academic achievement, professional employment, social interactions, parental involvement, curriculum development, assessment issues and so on.
Click here to read the full article.
Anna Kennedy online have created a survey and it is important that we hear your views. Please click here to complete this brief survey and share with friends and family. 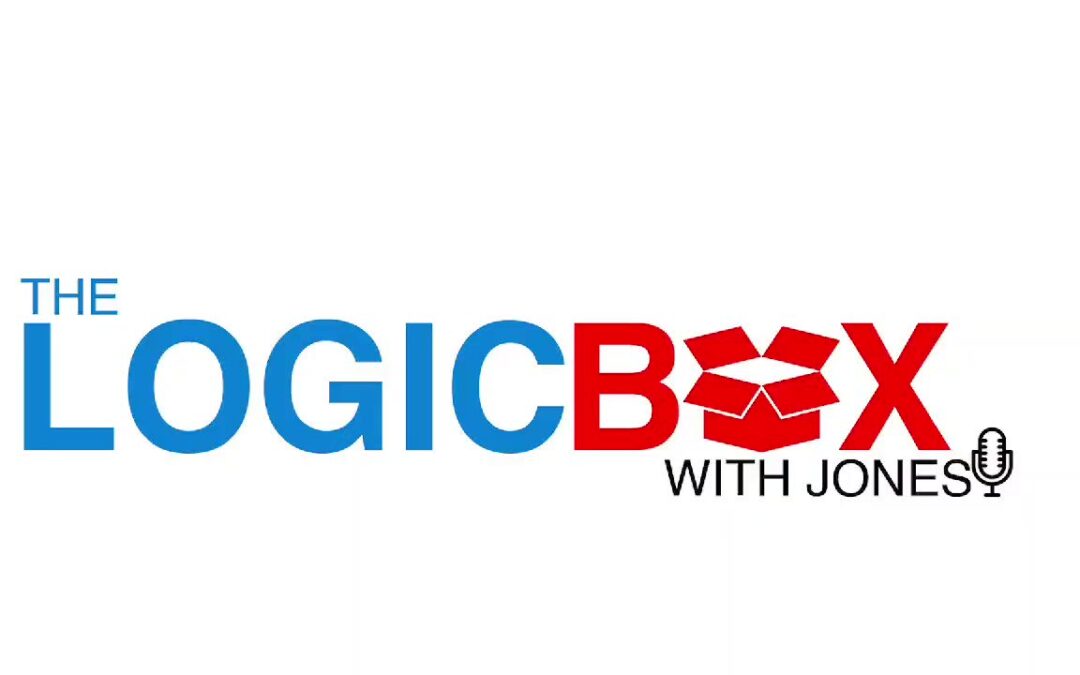 My World Through Autism

My World Through Autism

On this episode Prince Israel, a young man who is autistic shares his story and Vanessa Bobb talks about the impact of African culture on autism.
Hosted by The Logic BOX with Jones
Anna Kennedy online have created a survey as part of our Campaign culture, it is important that we hear your views.
Please click here to complete this brief survey and share with friends and family. 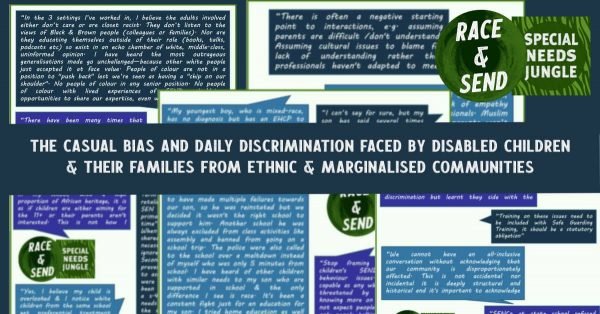 The casual bias and daily discrimination faced by disabled children

SNJ Report: The casual bias and daily discrimination faced by disabled children and their families from ethnic and marginalised communities

A new SNJ survey has highlighted how racial discrimination and unconscious bias are everyday experiences for disabled children and their families from ethnic and marginalised communities. Parents say they, and their children, are visibly less well-treated, and their needs and culture are disregarded by schools, where there is also a lack of representation of non-white staff and leaders.

And this isn’t just parental perception. Practitioners from non-white backgrounds say they have themselves witnessed it happening to families and experienced it themselves. Click here to read the full article and click here to download the report.

Anna Kennedy online have created a survey as part of our Campaign culture, it is important that we hear your views.
Please click here to complete this brief survey and share with friends and family. 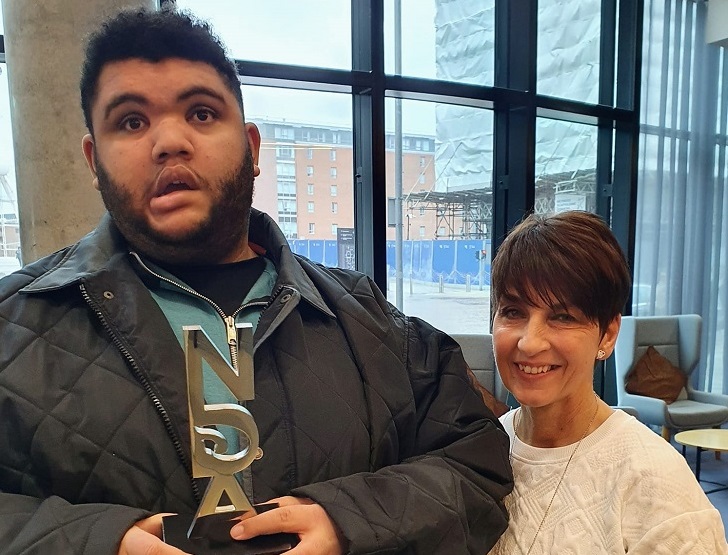 We are delighted to announce the winner of the National Diversity Awards Celebrity of the Year Award 2021 is one of Anna Kennedy OBE’s charity Ambassador’s Harvey Price!!

The eldest son of Katie Price, 19-year-old Harvey suffers from partial blindness, Prader-Willi syndrome, autism and other learning disabilities. Harvey and Katie documented a crucial year in his life during 2021 in a deeply personal film which highlighted the joys and difficulties of being the parent of a child with special needs, who is now on the brink of adulthood.

Anna Kennedy also was filmed for the documentary talking to Katie about the importance of this huge milestone in Harvey’s life. ‘You need to prepare well in advance when going through the transition process from school to college. It can be tricky to obtain funding for the placement of your choice’

Many parents contacted Anna’s charity after the programme and the Charity provided two free workshops online.

‘Harvey and Me’ documentary received huge critical acclaim when it was released and garnered over five million views in 30 days, helping to start a crucial conversation. In 2019 it was revealed that Parliament would back Katie’s ‘Harvey’s Law’ efforts to criminalise social media trolling after he suffered horrendous online bullying and trolling.

Harvey has fully supported the Anna Kennedy Online ‘Give Us A Break’ campaign and showcased his Talent on the keyboard at Autisms got Talent.  Harvey is also  is the new Ambassador for the UK’s learning disability charity Mencap, where he hopes he will be “a voice for young people like me”. Harvey is also a Diversity and Inclusion Ambassador for Lumo – a newly launched train service due to run between London and Edinburgh.

Another of AnnaKennedyonline’s charity Ambassadors was the inspirational Giuliana Wheater. Giuliana also a parent of a young man on the autism spectrum produces articles and videos on wellbeing and the power of touch and yoga every week. Please click here for more details. 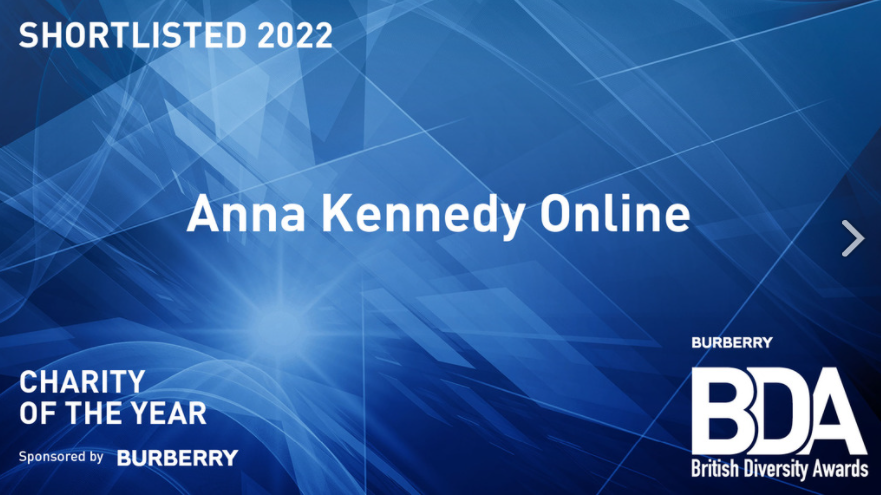 The British Diversity Awards promote the values of equality, diversity and inclusion by rewarding those individuals, organisations and unsung heroes who help to make the world and the workplace a better place for others. Progress and acceptance cannot be taken for granted, and although it has been shown beyond doubt that diversity is good for business and society as a whole, we’re witnessing a worrying increase in intolerance and hate crimes against minorities.

Everyone has a right to equality of opportunity and esteem without fearing harassment or prejudice. We believe that by continuing to bang the drum for equality, diversity and inclusion across these islands that we can help make the UK a better place to live and work for everyone.

Anna Kennedy Shared: “My AnnaKennedyonline Team and I are so excited and honoured to be shortlisted for this prestigious award. I couldn’t do what I do without my team of devoted volunteers. We continue to forge ahead and bang the drum to raise awareness , acceptance for families within the autism community who are struggling to make their voices to be heard.”

The Awards Ceremony will be taking place on Thursday 10 March 2022 at the Grand Connaught Rooms, London. Click here for details.