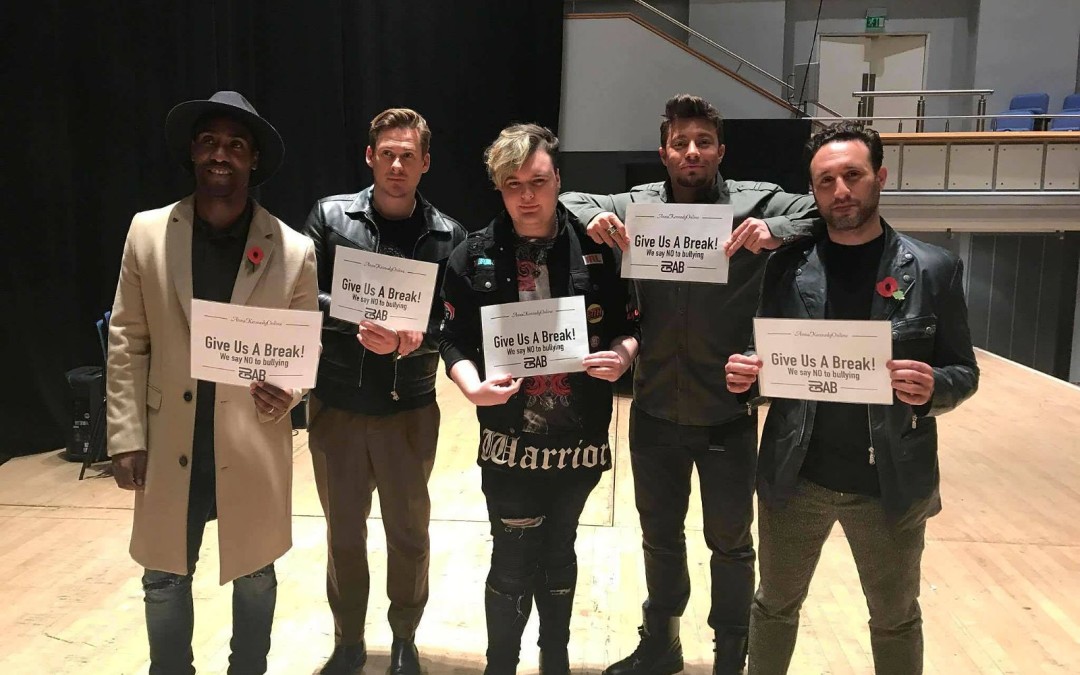 One of our Charity Ambassadors Macauley Elvin – shares a Christmas message

One of our Charity Ambassadors Macauley Elvin – shares a Christmas message

As 2020 comes to an end we look forward to Christmas and the New year, when we can all come back together to see old and new friends and enjoy the special events with Anna Kennedy Online and the AKO family.

Wishing everyone a Merry Christmas and a healthy New year, love to you all can’t wait to meet you all again, stay safe x 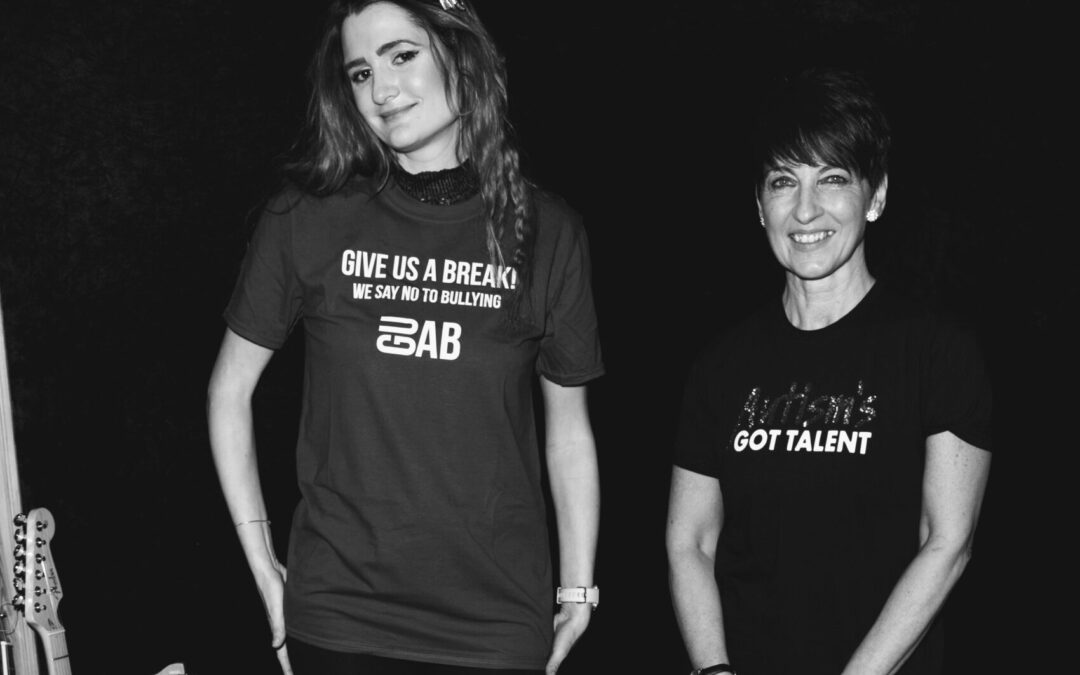 One of our Charity Ambassadors Lauren Lovejoy – shares a Christmas message

One of our Charity Ambassador the talented Lauren Lovejoy would like to wish everyone a Merry Christmas and a Happy New Year!

As we enter this Advent season leading to Christmas, many people will wish you joy and happiness. I wish that your heart fills up with the increase of self-confidence that will make you realise that you can do anything you put your mind to.

Most of us have faced adversities in life, especially this year, but we should never give up in believing in a better day.

Now is the time to reflect and realise that God made us all unique and each one of us has a special gift that needs to be discovered and nurtured.

I wish you all to have positive people in your life like those from AKO who will support you in achieving your goals.

We were all born to shine! 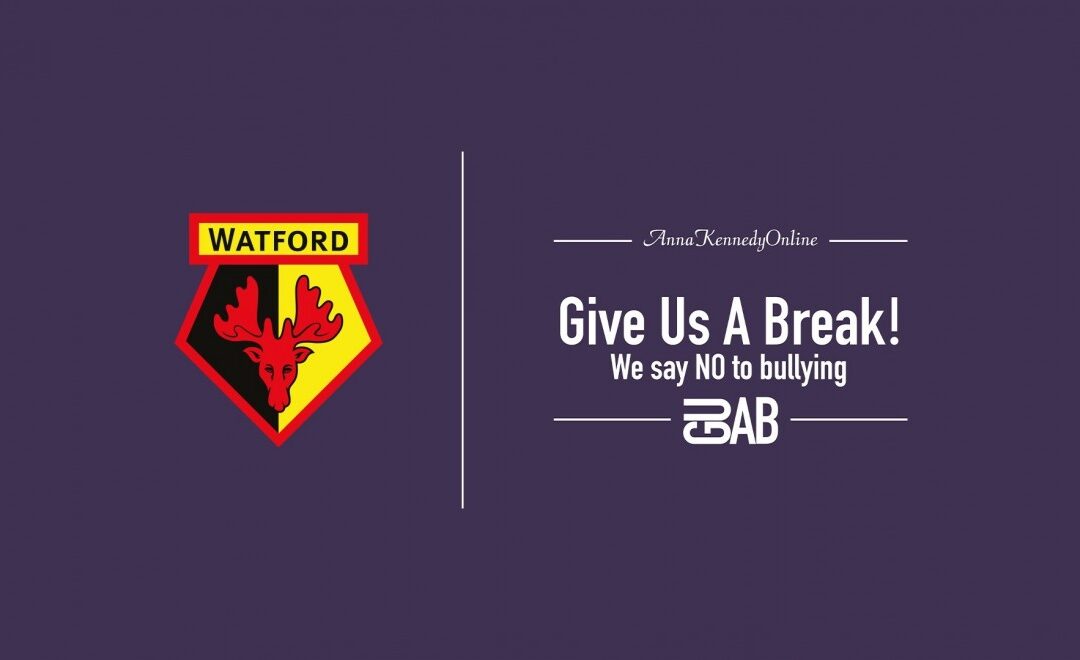 The Hornets were delighted to support Anna Kennedy Online’s Give Us A Break campaign during the recent Anti-Bullying Week.

To help promote the campaign, they ran a competition which asked young people to design their own anti-bullying posters, and after a great response, they were delighted that the judges have chosen the winners below.

Competition entries were split into two different age groups: a 0-10 category and an 11-16 group, with one winning design chosen by Watford FC staff and representatives from Anna Kennedy Online for each age group.

Congratulations to the winners Logan age 10 and Daniel age 11 – these two winning designs will be turned into posters which will then be signed by the first-team squad! 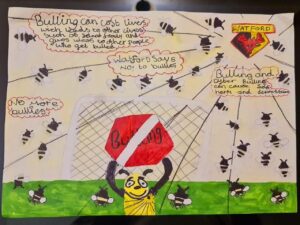 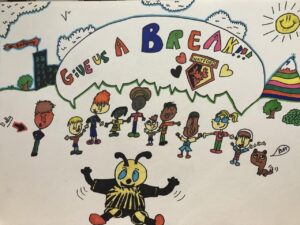 “It is very important to spread the message that bullying is wrong and it really hurts people.

By standing together we can help each other to beat bullies but maybe also help them too.

It is also important to understand why people bully as they may have secret problems and we together could offer them the hand of friendship and help them.” 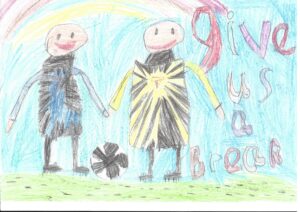 “Jacob says that his poster was inspired by the fact that anyone can play football, and it brings people together.” 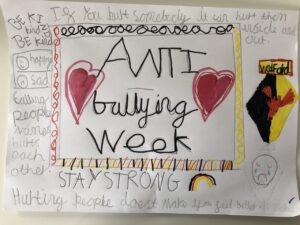 “Matilda was inspired by the thought that being kind is so much easier and nicer than bullying.” 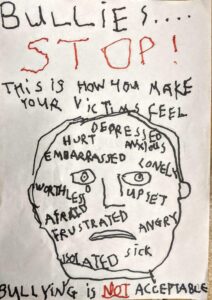 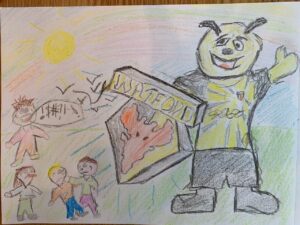 Second in the 0-10 categories was Dylan. 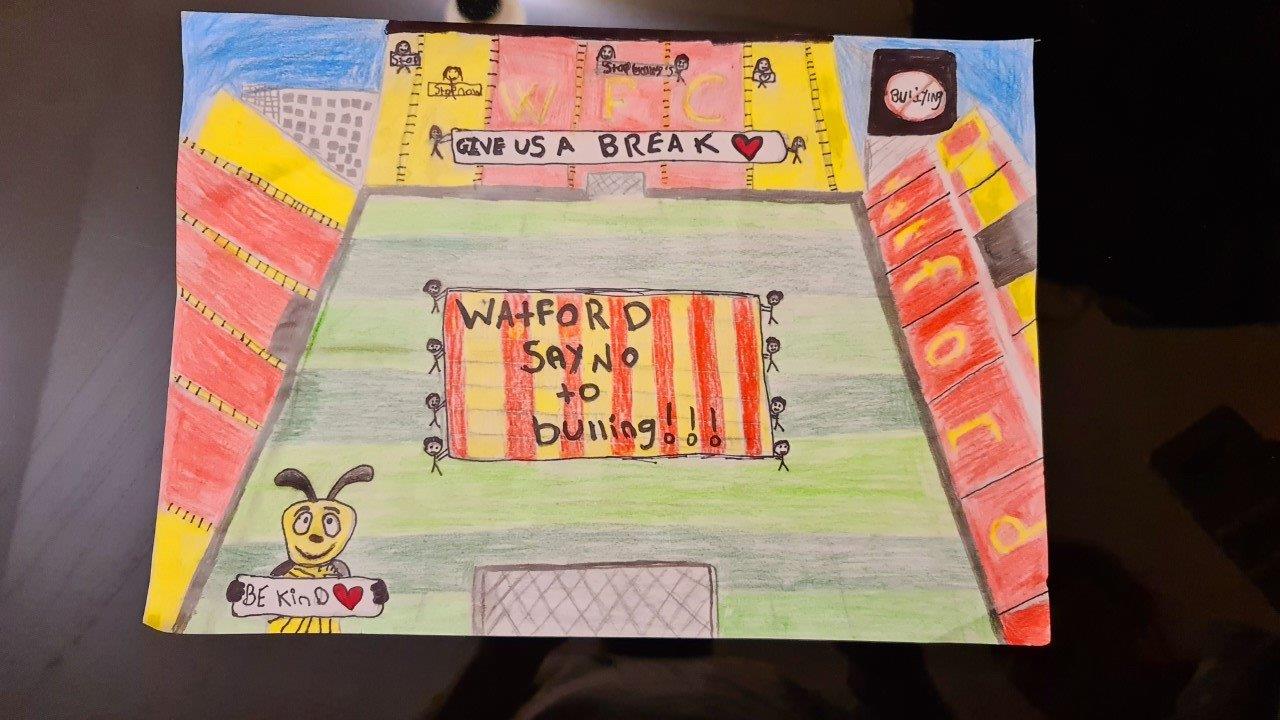 The second place in the 11-16 categories was Alexus.

“Henry’s love of Harry Hornet meant he was always going to be used in the poster.

But Henry also said Harry is always happy and nice and he would listen to Harry if he said bullying was bad!” 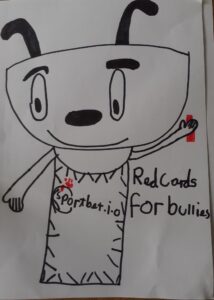 “I wanted to create a poster to show anyone who may be suffering with bullying, that there is always a friendly face who will support them” 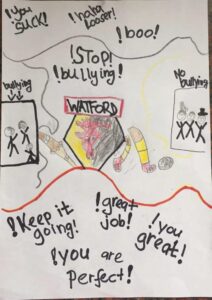 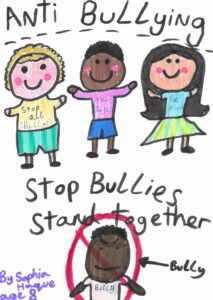 “Sophia says she was reminded of when her best friend was being bullied by a class mate. She didn’t like the idea of people being bullied and wants everyone to be kind.” 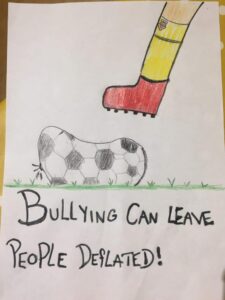 The third place in the 11-16 categories was Lillian. 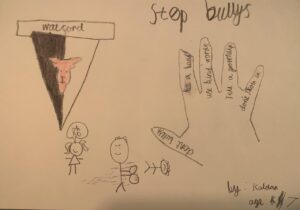 “Kaidan was inspired to share his own experiences and not wanting others to feel the way he did.

He wanted it to be easy to remember so people could help each other to be kind.

He wanted the Watford badge in it to show that they were against bullying too.” 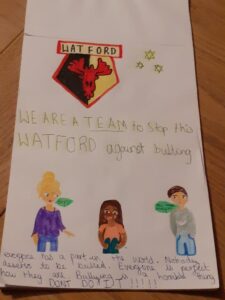 ​ “I’m happy to have my poster seen on social media because I want to stop bullying and show no matter who you are we are all equal!” 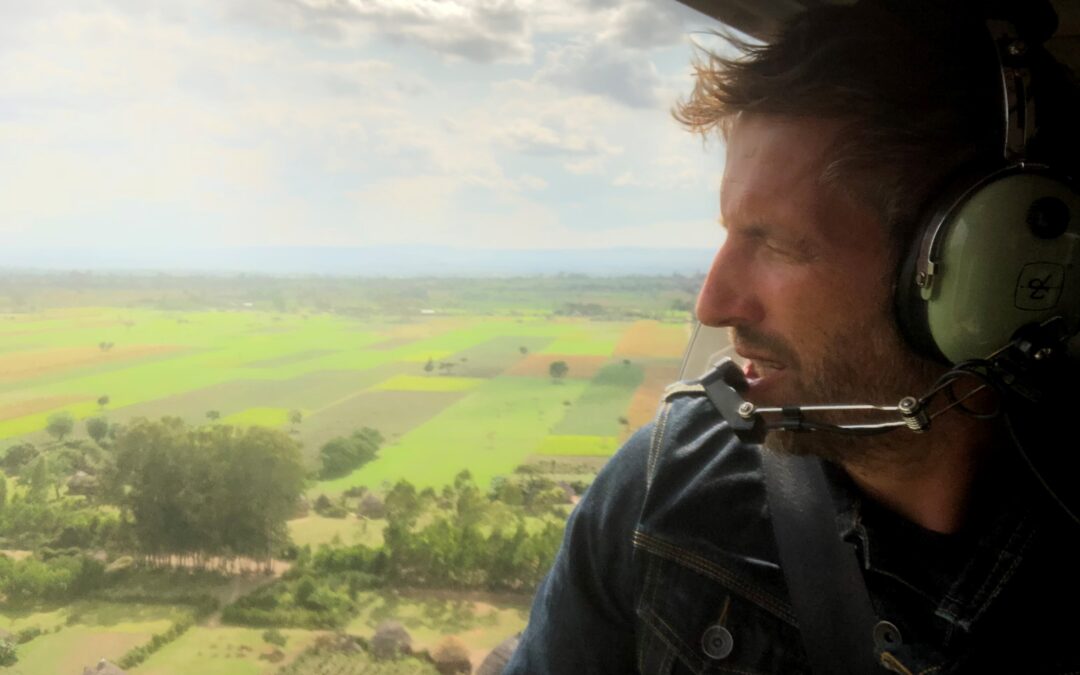 Antibullying Campaign ‘Give us a Break’ – supported by Mikey Kay

‘Give us a Break ‘ Antibullying Campaign supported by Mikey Kay

Mikey Kay is a Welshman based in Paris, having spent the previous 6 years based out of New York City. I specialize in multi-media journalism and filmmaking, specifically across social impact stories as well as international conflict and risk-on zones. I worked across terrorism, national security & aviation for 20 years, as an assault helicopter pilot and strategic military planner in the British Military.

A brilliant and extremely personal documentary filmed over 4 years in the mountains of North Wales, that shines a light on the family and carers who make huge sacrifices to give a severely autistic man an unparalleled quality of life roaming the great outdoors, even to the detriment of their own.’

A big Thank you to Mikey who shares a supportive message for our charity Antibullying campaign ‘Give us a Break!’ taking time out for his good friend Anna whilst he is busy filming in Norway!

Please watch his amazing video below:

If you would like to spread the word of our Give Us A Break campaign please click here to download the poster print off and please take a photograph of yourself and email it to lisa.robins@annakennedyonline.com, so we can share your support by getting involved!

Click here to look at our campaigning from previous years. 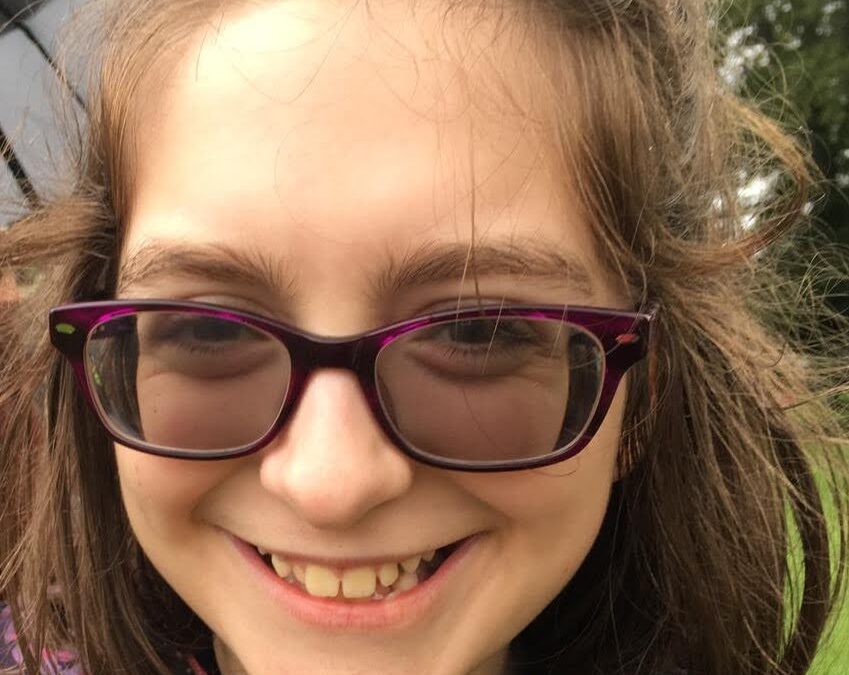 If you would like to spread the word of our Give Us A Break campaign please click here to download the poster print off and please take a photograph of yourself and email it to lisa.robins@annakennedyonline.com, so we can share your support by getting involved!

Click here to look at our campaigning from previous years.

In May 2017 Daisy’s mum sent Anna a message after Autism’s got Talent it said : ‘Hi Anna. We just got home from AGT. I was inspired, moved and entertained. My daughter was mesmerised and enchanted. Daisy is 12 and has autism and learning difficulties. She said she was so happy there and able to be herself. The atmosphere was great. ‘ Jude x Then in July 2017 we met in Covent Garden as a surprise for Daisy. We had a lovely time .

Now 3 years later Daisy is one of my young Charity Patrons and she created this video about what Autism means to her. Proud of you Daisy.

Through the years we have met so many wonderful families , autistic children , autistic adults and friends through this Autism’s got Talent it is very special.

Please watch her video below: