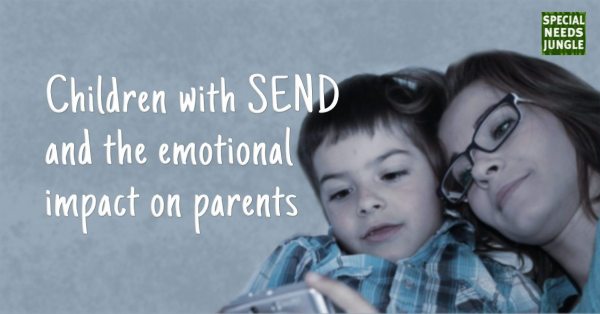 I recently came across a research article in the British Journal of Special Education entitled, Children with SEND and the emotional impact on parents by John Holland with Gabriella Pell, so it immediately grabbed my attention, as you can imagine.

The article itself is locked behind a paywall, but I got in touch with the authors to ask if they would like to write an article about their research for us. While of course, the experiences here will be well known to our parent readers, I think it’s a useful piece of research for professionals, especially those who are seeking to influence their senior managers to be more holistic in their support. I’m sure parents will be keen to pass it on too!

John, a freelance educational psychologist, and Gabriella, a social worker, very kindly agreed to write about their study for us, so today we bring you their research. If you have comments, please try to leave them here, not just Facebook, so the authors can see them too.

Children with SEND and the emotional impact on parents

by John Holland and Gabriella Pell

The SEND process can have a significant and sometimes unrecognised effect on the emotional wellbeing of parents. We carried out three projects, our hope being to listen to the views and experiences of parents, to raise awareness of the issues affecting them and to offer some level of reassurance to parents, that they are not alone.

All children can present parents with emotional challenges, however there are often additional ones for parents of children with SEND, who may have to battle to first gain formal recognition of their child’s difficulties, and then to gain the support that they need. This will not come as a surprise to many parents, and professionals.

Only once confirmed by professionals, is the gate towards support opened, but this can also be a time of emotional stress, especially if parents have to take a legal route to access this.

Parents often described themselves as being under ‘constant stress’, this mixed with the grief of being in a situation that they had not envisaged.

Mental health issues were often raised as parents tried to negotiate through the challenges of the system whilst suffering the ‘loss’ of the child they had expected.

This had an impacts on some parent’s sense of identity and was described as detrimental to both their social life, as they had less free time, they were tired, and additionally, family and friends were sometimes not as supportive as parent’s had expected.

The value of being listened to

The Children and Families Act 2014 had a focus on early identification and agencies working together from the stage of diagnosis. This was intended to help parents, and since the change in legislation, parents stated that they found professionals and support groups of greater help than family and friends.

Seventy percent of parents expressed feelings of being included in the SEND process, which was an increase from previous findings however also highlighted that work still needs to be done, as thirty percent of  parents felt excluded from the process.

We found that parents valued a listening ear and emotional support above practical advice and information, and that voluntary sector can play an important and vital role here.

Over three quarters of parents said that the diagnosis process had a negative effect on their family and friends, a third feeling that families and friends simply did not understand. This is similar to a bereavement, where also some family and friends do not know what to say and how to interact, and would metaphorically, if not literally, cross the road to avoid engaging with them.

Family and friends sometimes lacked understanding, some did not accept that the child had any problems at all, and in some cases even blamed the parents. Several parents also felt that there was a detrimental effect on other siblings, they felt they lacked the time and/or resources to meet the emotional and social needs of all of their children, all of the time.

Parents reported feeling isolated and that family life in some cases became more stressful and pressurised, and this led to the breakdown of some relationships. Stresses within certain families had led to separations and divorce, and friction within family relationships.

A culture of parent blame

There is a long standing Government focus on parenting and the outcomes, with policy makers placing accountability on parents and specifically mothers, to develop their parenting skills and responsibility’s. This has perhaps led, unintentionally, to a culture of parental blame which our study shows is often causing a damaging effect on families.

Our research overall showed a significant shift towards more consistent positive parental experiences. Despite this positive change, however, not all families benefitted from the intended model of cohesive seamless support. It is clear that parents need to be genuinely informed, not only about the decisions affecting their child’s life, but to have accurate clear knowledge of the guidance and legislation behind the processes involved.

Accessible information of the process and about their child is crucial in helping empower parents with the knowledge and understanding to advocate for their child and to positively navigate the processes. Professionals are not the ‘experts’ when it comes to individual children and their role doesn’t stop at just ‘involving’ the parents; there needs to be considerable effort afforded to directing parents to information and sharing some of the powers that historically has ultimately always remained with the professionals.

We completed two projects using questionnaires and focus groups to gain the views of families being supported by KIDS Charity, Hull.

We are currently gathering data for a third project and if you are the parent or carer of a child with an SEND we would love to hear your views and experiences. If you would like to be involved, please kindly complete the questionnaire available at this link. The questionnaire should take no longer than 15 minutes to complete. The information collected is anonymous and will be used to create further guidance on how to better support parents and carers.

Source: Children with SEND and the emotional impact on parents – Special Needs Jungle