Could it be Magic! 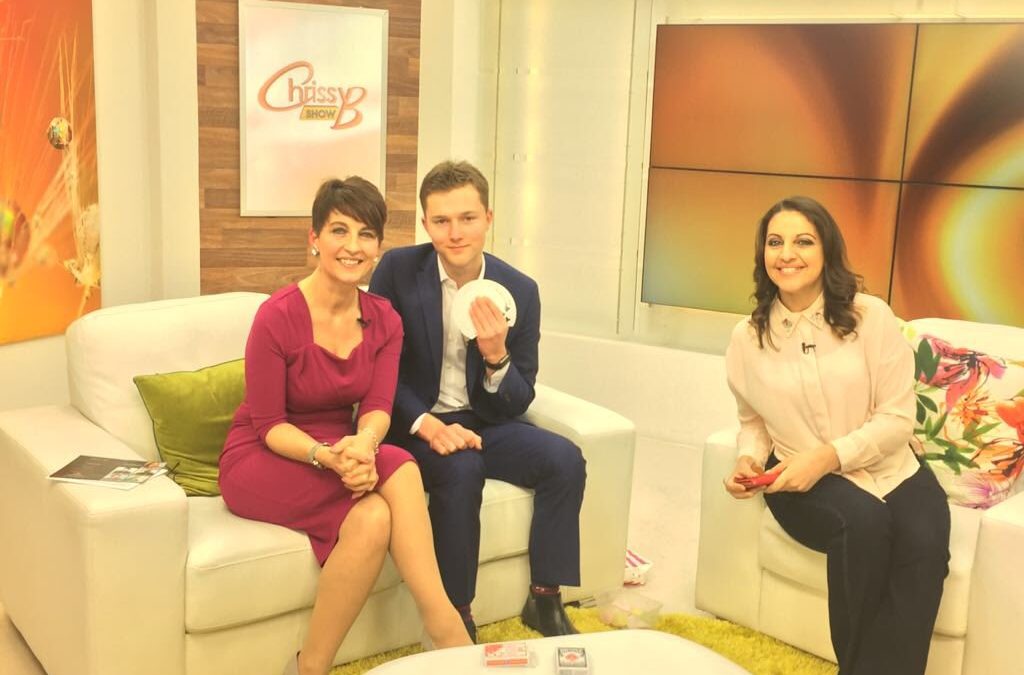 Anna Kennedy OBE is back on her regular autism slot in 2018 on the Sky TV’s Chrissy B Show. Her guest this month is Autism’s got Talent Angus Baskerville. Anna asks Angus ‘Why magic?’

Angus responds ‘ Do you remember the phase that many children go through at around 10 years old where they get interested in magic and get little magic sets for Christmas to wow all the family on Christmas night with disappearing handkerchiefs and the like? ‘

Well, Angus came to this a bit late at around 16, but as most parents of children on the autism spectrum will appreciate, what is a passing interest for most neurotypicals, can become a special interest for someone on the spectrum!

His parents and sister were getting a little bored of the same old tricks and birthday presents were always difficult, as Angus couldn’t be palmed off with clothes or music like many other kids of his age.  So, for his 18th birthday in 2014, his parents bought him a beginner’s magic course at the famous Davenports Magic in London.  This really lit the spark and he has not looked back.

Magic is much more than a hobby for Angus – it has been his way of gaining credibility with his peers.  Having been bullied through his school life and not being able to find any common ground with people his own age, suddenly they were watching him with interest and asking him to entertain them.

The business has grown through word of mouth and started in the local pub where Angus would go in to work the tables, suggesting that any tips would be welcome.  He probably wouldn’t have done this, had he not had autism with ADHD because the plus side of such conditions is that there is very little fear of consequences so he didn’t even consider that some people may reject him.  Through those nights at the local pub, he got his first wedding gig and work has been rolling in through referrals.

Other than his family who have been very supportive, the other person Angus has to thank for really helping his career is Anna Kennedy OBE, and her wonderful team, of course.  Angus shared with us how he felt when he was first on AGT:

“That night on stage for the first time in front of 600 people at the Mermaid Theatre was just like a dream come true.  I couldn’t believe that all those people were watching me and that I could hold their attention.  I loved the whole day because I could be myself and meet other people being themselves too and it was great for my parents to meet other parents and hear their stories.  It all went so quickly after months of preparation and I wanted to do it all over again.  Since AGT 2016, I have had so many amazing opportunities, like doing magic at the Autism Hero Awards and performing again at Autism’s got Talent 2017 and now his first television appearance alongside Anna Sky Tv’s Chrissy B Show.”

Angus shares ‘My dream is to get an agent to help me build on my success and to become a member of The Magic Circle.  I would love to do more stage work and to keep bringing magic into people’s lives, both young and old.  One day soon I hope to be doing magic full time and build up my modelling career alongside it.

I am determined to prove that autism can be a gift and that with the support of family and charities like Anna’s charity who care, it is possible for autistic people to build good careers by being their own boss.  I tried for a long time to get part time work – even washing up jobs, and I just couldn’t get anything.  That’s what pushed me into walking into the pub that day, and thank goodness I did because I know how lucky I am to love what I do and to get paid for it too. ‘