Anna Kennedy Online would like to introduce to you a new innovative, exciting, and unique opportunity called First Steps!!!

If you have an online business idea or have recently started an online small business, you could be eligible to apply to First Steps with an opportunity to win a start-up grant of £1000 along with mentoring support for one year.

This is a unique programme of professional support that aims to help anyone to turn their business ideas into a start-up or to further develop their start-up business.

For anyone on the autistic spectrum wishing to take part in applying for the First Steps please complete the online application form below and present your online business ideas to a panel of experts. Applications close on 31st August 2022, and we look forward to hearing from you. Good luck! ​

Introducing you to our panel of experts:

Ben Pearson, the serial entrepreneur with a difference. Diagnosed with autism, Ben has used his platform to create inclusive clothing that strives for change. After years of shopping (or not) on the high street for plus size men’s clothing, Ben Pearson, created BigClothing4U to solve a problem many bigger men across the nation suffer: clothing that not only fits, but looks good too!

At nearly 30 stone, Ben dreaded going shopping on the high street, he would go in hundreds of shops to maybe find one item that fitted. It became very apparent that the high street just doesn’t, or can’t, cater for the bigger guy! Nearly 8 years on, from humble beginnings, Ben has created several multimillion pounds clothing companies, selling from his e-commerce platforms. Ben says, “life is too short to fit in, when you can stand up and make positive change”. Having autism, growing up in the care system and battling homelessness at just 17, Ben has faced more challenges than most!

Upon being a selected ambassador for the charity, Ben said, “It’s a great honour and privilege to be a chosen ambassador for such an innovative charity. As someone with autism, I’ve often been misunderstood. I often wish that I had someone like Anna and her incredible charity growing up to help champion change”. I am delighted to be able to help and support an individual on the autistic spectrum start a business with “first step”.

Fredi Nwaka is an award winning script writer, film director and producer. Known to many as KRUGA or FREDI KRUGA he is the second youngest of six born to Angela and Francis Nwaka. South West London born, Fredi spent his teenage years between the urban back streets of Brixton and the plush opposites of Kings road Chelsea. His early teenage years would see him become a member of South London’s notorious gang ‘The Untouchable’s’ as well as making use of his talents and becoming a house hold name on the sound system circuit.

A combination of these two earned him his name ‘KRUGA’ and his name and skills as an Mcee soon spread across London’s underground. Combining a hard hitting dancehall style with UK rap soon carved him out an edge over a lot of UK rappers and it wasn’t long before he began to win awards for his talents.

He won Best Newcomer, Best single and Best video in the Hip Hop Awards as well as becoming the only UK artist to be affiliated to the US Powerhouse The WuTang after being signed to Wu International. Performing at numerous events from sound clashes to festivals and then on to larger events such as Freaknik in Atlanta, Carnival and various events in the Caribbean his name soon became embedded in UK Hip Hop.

It wasnt long before Fredi became involved in his lifelong passion of acting and took on numerous small roles in TV and drama but got his first major break featuring alongside US rapper Curtis ’50 CENT’ Jackson in the UK gangster film DEAD MAN RUNNING. This film also featured a host of UK actors from Danny Dyer, Tammer Hussein to Brenda Blethynn and Ashley Walters. He went on to act in films such OUTSIDE BET, PUSHER, FORBIDDEN NOTE, LEGACY, BROTHERHOOD, THE INTENT and more recently Sky’s BULLET PROOF, just to name a few.

Going on from strength-to-strength Fredi has written a number of feature films to date as well as number of award-winning shorts and has his own production companies Are We Dead Yet LTD and Gridlock Films.

I have had this project in mind for a little while now and I am so happy and excited its finally going to happen!

I have spoken to many autistic individuals who would run their own online business if they were given the chance to discover something they would really like developing their skills around their interests.

I am excited that Ben, Kellie, and Fredi are supporting the charity with my idea, and we cannot wait to read all the entries. I am sure that it is going to be difficult to choose our winner and hope that the start-up grant will give our Autistic Entrepeneur the ‘First Step!’

My name is Kellie Barker, and I am a Parent of three amazing children who all have very different needs, from Kent.

I set up Born Anxious a label free clothing label in 2017 as my youngest child has Autism and we wanted to make being kind cool and spread messages on sensory clothing.

I have been connecting with Anna and the Charity since 2018 and proudly have become Charity Champion helping the charity raise awareness and funds to feedback into projects and events to promote positive experiences for people living with Autism, we are spreading our messages around the world and connecting with so many people to help raise the profile and education of how cool Neurodiversity is and encouraging inclusion and break barriers.

I am very excited to be involved with First Steps it’s a fantastic idea and opportunity shining a light on Entrepreneurs that  may be over looked in the mainstream due to the lack of reasonable adjustments, it gives me a chance to put into practice some of the things I have learned since creating my own business and pay that forward to others and help be part of something they are creating and watch their journey and support them.

I also feel my experience as a parent of a child with multiple barriers for communication and understanding will be applied throughout the process and add to its success, I am also so happy to be working with the Charity again and the amazing team and fellow panel members. 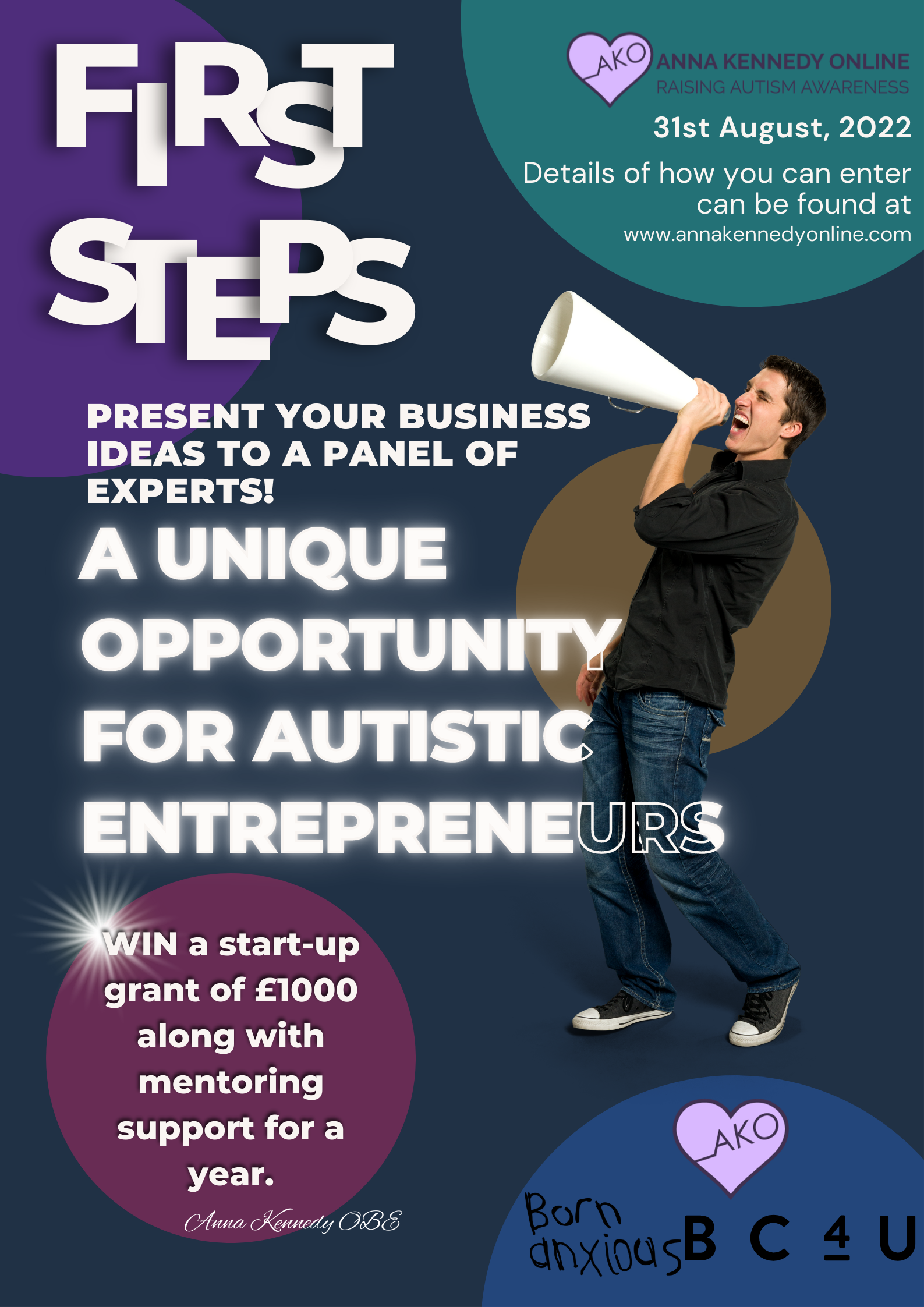