I chose mental health over a prestigious Sixth-Form, that refused to recognise my autism By Siena Castellon 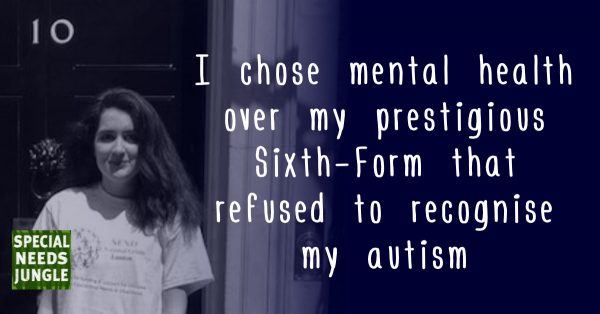 A lesson I recently learned is that sometimes admitting defeat is the best decision you can make.  This time last year, I was elated about starting at a state sixth-form specialist maths school. I was in disbelief that I had managed to earn a place through what had turned out to be a very selective and competitive admissions process. But more than anything, I was excited about going to a school with students who love maths and physics as much as I do; a school that prided itself in having lots of autistic students. I was hopeful that I had finally found a place where I would fit in and where I would be understood and supported.

I couldn’t have been more wrong.

My school experience spectacularly derailed in the very first week. In hindsight, I should have immediately cut my losses and returned to my previous school, where I had been happy and valued. But I haven’t overcome all the challenges of being autistic, dyslexic and dyspraxic, and of having ADHD and hypermobility, by being defeatist; by throwing in the towel and walking away when life got tough. On the contrary, although I’m still a teenager, my many challenges have taught me the importance of never quitting in the face of adversity. Especially if quitting involves giving up on something that really matters to you. But as I recently learned, sometimes the cost and sacrifice isn’t worth the fight.

So, when is it acceptable to admit defeat and walk away?

National praise, but ‘torture’ in school

Last year, I lived a double life. Outside of school, I became a nationally-recognised, multi-award-winning neurodiversity advocate. I signed a publishing deal to write a survival guide for autistic girls. I launched a national neurodiversity school campaign and was featured in a Netflix documentary showcasing global changemakers. I was invited to Kensington Palace to meet the Duke and Duchess of Cambridge. I spoke in Parliament and at 10 Downing Street. It was a year in which I discovered that I had a voice.

Yet, at school, my voice was not heard. Every minor request for a reasonable adjustment became an insurmountable obstacle. It took over two months of repeated requests, emails and meetings to finally be moved to a seat where I could see the whiteboard. Although the school agreed to inform me in advance of any significant changes in the classroom teaching format, without any warning, I frequently found myself having to endure physical activities that turned the classroom into a noisy, chaotic and frenzied environment.

On one occasion, we were instructed to grab our chair and run out of the classroom with it. I found the pushing, shoving and shouting that ensued very distressing, as a classroom of mostly 17-year-old boys tried to be the first to force their way through the narrow doorway.

On another occasion, the same teacher brought a penguin-shaped beanbag to class and informed us that whoever caught the penguin had to provide a definition for a term we learned in class. I was immediately filled with dread, because I’m dyspraxic, have poor reflexes and am hopeless at catching airborne objects. So instead of learning, I spent the lesson worrying I would get hit by the beanbag and trigger autism-related sensory processing issues that make me very sensitive to touch.

My worry became even more plausible when a classmate was hit in the face by the beanbag. I became increasingly distressed as, more than once, the beanbag hit the fluorescent light dangling from the classroom ceiling, making it swing back and forth. It’s common knowledge that florescent lighting is an autistic person’s equivalent of Kryptonite, so being trapped in a room with fluorescent lighting swaying back and forth, back and forth, was torture. The combination of chaos, noise and the swinging fluorescent lights left me nauseous with a throbbing headache. This led to an internal panic attack and anticipatory anxiety, since I never knew what to expect, or what sensory classroom nightmare I would find myself in next.

It wasn’t long before my mental health and physical wellbeing began to suffer from the stress and anxiety of being at a school apparently unable, or unwilling, to understand my disability-related needs. Three weeks into the school year, I was admitted to A&E with a severe panic attack. They prescribed beta-blockers to lower my heart rate, as well as medication for excruciating, stress-related, acid reflux. Yet through it all, the school was more worried about my attendance than about my mental health and emotional wellbeing.

Over the next few months, it became clear that the school was not going to bend, or make reasonable adjustments for my disabilities. I found myself in a sink or swim situation. It was up to me to endure and survive my school environment. As I clung on by my fingertips, I dreamed of walking away; of going back to my old school, where I had been happy and had felt safe. But my fear of being a quitter, of giving up prematurely without having given it my all, prevented me.

Instead, I faced each obstacle as if it were the burden and punishment I had to carry for being autistic and having learning differences. A modern-day Sisyphus being forced to roll an immense boulder up a hill, only for it to roll down when it nears the top, then having to repeat the action for eternity. By the end of the school year, I was physically, emotionally and mentally shattered. But resigned to enduring another year.

A transformative summer changed my mind

This summer, I spent five weeks at a math camp summer program in the US (where my parents are from). I was reunited with old friends and made new ones. It was there that my eyes were finally opened. As I shared my Year 12 school experience with my friends, they were incredulous as to what I had endured. But more importantly, they were at a loss as to why I hadn’t walked away from what was clearly a toxic situation.

But as I tried to justify why I had stayed, I realised that sometimes the fight isn’t worth the toll it takes; that sometimes calling it quits and walking away is the best thing you can do for yourself. It doesn’t matter how much time and effort I invested in trying to make the situation work, it didn’t make sense to continue to try to survive in a school that was not prepared to support me. So I decided to stop focusing on what I would lose if I moved on and instead, decided to focus on what I would gain from a new start

My future is bright – and happy

If you’re ever in a situation where you are waging a losing battle and you regularly find yourself questioning whether you should call it quits, listen to yourself. You don’t always have to make the best of a bad situation. Sometimes, cutting your losses and walking away is not a sign of failure. Sometimes, the price of sticking around costs too much emotionally and prevents you from moving on to new and exciting opportunities where you could flourish and grow.

I am proud to say that I have cut my losses. I’m about to start Year 13 at a new school. I am looking forward to a new start and am relishing the promise that comes with new beginnings.

News I chose mental health over a prestigious Sixth-Form, that refused to recognise my autism By Siena Castellon