‘Own your own story’ – how racing go-karts changed my life 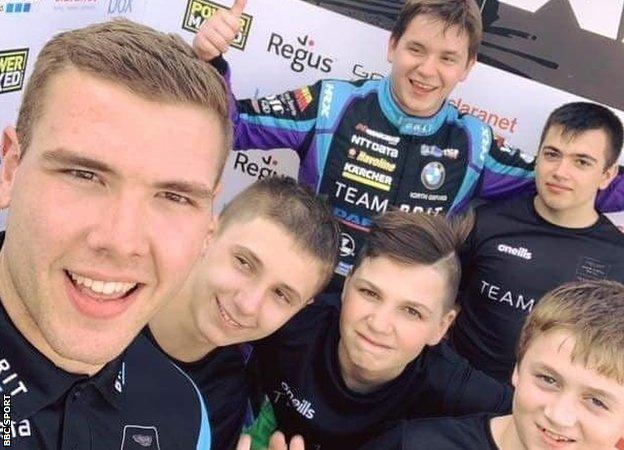 A great piece with one of my Charity Ambassadors Matty Street CEO of @Teamkarting and Sandro Ballesteros winner of one of our charity hero awards a couple of years ago whoop!

Source: BBC Sport – ‘Own your own story’ – how racing go-karts changed my life:-

Some people might be able to tell you exactly what kind of train is on the track and where it was made, but for me it’s all about motor-sport. There are bad days. Recently, I couldn’t cope with the transition of moving house. The colour of the new soap-holder and the position of the glasses in the new kitchen caused me to completely flip out. I took time off work, I imagine I was quite grumpy and snappy to some people. Sorry mum. There’s always bad days. But you’ve got to get up and crack on.

I’m Matty Street and I’m the CEO of TeamKarting, I’m 22 and I have autism. Here’s my story.

Autism is different for everyone. Me and my brother are autistic, and – as my mother would say – we are chalk and cheese.

I like structure and routine and he is more relaxed in that respect. It varies from person to person but, ultimately, it’s a social disorder which means some people struggle to understand what others would take as ordinary.

There are so many negative labels associated with autism. A friend of mine says I’m not supposed to be good at eye contact. To that, I say it’s overrated – depending on who you’re looking at.

There are so many different aspects of the link between autism and motor-sport.

There is the repetition of constantly going around the track – nothing really changes. The speed of it is calming, because you’re constantly going ‘break, accelerate, turn’ and looking at all these different reference points.

It’s soothing because your physical actions are keeping up with the speed your brain is working at.

Motorsport isn’t like most sports. When you put the helmet on in the car or kart, it’s just you; the driver.

In football, for example, there are 11 players on the pitch who rely on each other and communicate socially. With motor-sport, you don’t necessarily need to do that which is why it works out so well for some people with autism.

I manage a race team with 11 drivers. A couple of those drivers are autistic and when we turn up at a new track you can immediately sense the anxiety there.

At a new place, they don’t have familiar surroundings – all those things are going through their head and it takes a while for them to come out of their shell.

But the minute you put the helmet on it’s a sense of calmness, and a sense of relief and security that you are within yourself and it helps your initial anxieties.

I’d always like to know where I’m going, so if I’m going to a track for the first time I’ll always be extra prepared so that when I arrive I know what’s what.

Fired, rehired… then bought the business

Has motor-sport changed my life? Massively. Without it, I wouldn’t be in the position I am in now. I have a lot more confidence now – I’ll quite happily speak in front of people. I wouldn’t have done that in school.

I didn’t tell anyone at school I had autism – even my closest friends didn’t know. When I was a kid I didn’t like the way PE shorts felt and you couldn’t get me to wear shorts for the life of me – it would be the world’s hottest day and I would still be in jeans or jogging pants.

Autism was just not something I felt confident to share or relevant to share at the time, but now I see kids coming through and struggle with things that I struggled with.

Since leaving school, everything evolved around motor-sport, and I went to college to do motor-sport engineering. At the time, I decided I didn’t like getting my hands dirty so I decided to go down the management route instead.

I started working at TeamKarting part-time at university, got myself fired, rehired, and then eventually bought the business with my business partner Chris.

By the time I was 21, I had qualifications, was a business owner and employed 30 people.

I’m a completely different person to how I was in school. Back then I wouldn’t say boo to a goose. Now if I’m doing a deal, I would quite happily walk away because it’s my way or no way.

I feel like I’ve got that insight to be able to help and share my experiences to make it a little bit better for them.

My biggest achievement is helping people with similar backgrounds to me defy all the misconceptions that come with it.

Advice to others? Own your own story. Just because someone says you shouldn’t be able to do something, doesn’t mean you shouldn’t give it a go.