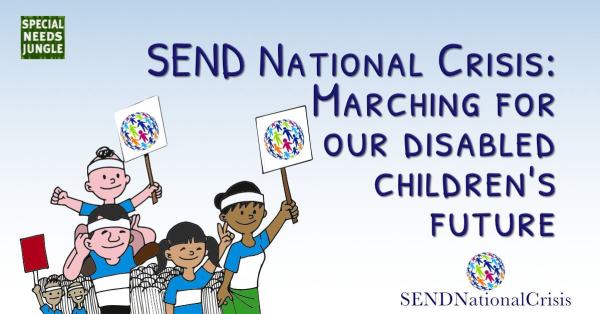 We’ve written many posts here on SNJ about the funding crisis. Renata and I also joined the NEU organised event at the back end of last year. And as the days tick down toward the Government’s long awaited spending review, it’s more important than ever to show how you feel.

Today on SNJ we’re hearing from the two SEND parents who are masterminding coordinated marches and rallies across the country on May 30th this year. From the start a year ago, increasing numbers have joined the #SENDNationalCrisis Facebook group, and offshoot groups for local marches, as the plans have developed. There’s also a public page here

The reforms were designed to end the adversarial system that all-too-often sees parents at loggerheads with local authorities over SEND provision. But the new 0-25 system that covered education, health and social care provision was never likely to come cheap. And doing it in a holistic way that included culture change was always going to be more than the cost of changing the nuts and bolts.

But the government’s abject failure to foresee the true cost of implementation, coupled with its leadership deciding that austerity was best visited on the vulnerable, have heaped chaos, pain and misery on the very families they purported to help. This morally bankrupt, seemingly psychopathic, Brexit-obsessed Government (if you can still call it a Government) is daily harming the life chances of a generation of children to whom it promised a brighter future. Our disabled children have become collateral damage to a broken ideology.

We met Poppy Rose, one of the leaders of the SEND Crisis group at that same NEU event. She’s here today with her co-organiser, Nadia Turki, to jointly tell you all about the marches and why they’re taking action on 30th May.

Join the SEND Crisis marches to fight for our disabled children

Nadi Turki: It’s 2019 and in a time of austerity, people have come together to fight for what’s right and for the greater good. In 2019 we can develop gene-targeted therapies to alter outcomes of congenital diseases and even manipulate the human mind. Yet, today we have thousands of parents and carers in this beautiful, bright country, fighting for a fair education for disabled children and young people. Why? Because their / our children do not fit the normal criteria for accessing education.

Some of the greatest minds in human history have been in some way different. Einstein – Asperger’s, Stephen Hawking –  Amyotrophic Lateral Sclerosis, Andrea Bocelli – Congenital Glaucoma, John Nash – Acute Paranoid Schizophrenia. The list really is endless. So why is there an open discrimination towards disabled learners? Why are they disregarded in terms of their abilities? Don’t get me wrong, this is not the trend throughout the country. I have spent time with so many professionals that fight for the rights of these groups and support our fight for equality. However, there continues to be a lapse of support and assessment for this group resulting in tens of thousands of children and young people being left without an appropriate education. In some cases, left without any form of education or even worse; left within an education establishment that is unable to cater for their needs. The latter resulting in some very damaging mental health,  trust and confidence issues.

I am one of the parents that believes that this current system isn’t providing fair and equal accessibility for all. I believe, or should I say ‘evidence shows’, that the current legislative framework surrounding SEND, has more holes that a fish net and is allowing local policies to avoid and tactically refuse the correct or required provisions for children across the country.

My name is Nadia Turki and I have three children. My eldest child was born with bi-lateral Peters Anomaly and was blind from birth. He does have a very limited level of light dark perception and has a number of other related congenital conditions such as hypo-posterior pituitary and hypermobility.

From day one, we have been lucky enough to have an amazing team of medical professions managing my son’s constant medical intervention, however his education and social development have been a different matter altogether. My son has amazing support in school and has always built very strong relationships with his teachers and VI support.

The struggle for inclusive education has been relative to our desire to have a balance of social development. We desired a local Secondary school to enable him to establish local friends and were told that this would not happen as a different Secondary school had already been set up with a provision to accommodate visually impaired students. This was an ongoing battle that we unfortunately lost, and although my son is happy at school, he lacks any level of social life that doesn’t rely on his parents’ input and transport etc.

So this was why I started to look at the current SEND structure and legislation. I quickly realised that it is flawed and that thousands of children and young people were not being provided with correct or adequate education provisions… HEY PRESTO, @SENDNationalCrisis was born!

I am a single parent to two boys aged 19 and 14. My youngest son had early diagnoses of  Dyspraxia, Hypermobility, Severe Sensory Processing Disorder, Global Developmental Delay, and Sleep Difficulties. He received further diagnoses of ASD and Severe Anxiety aged 12.  My son attended a mainstream primary school where his needs were managed. Early intervention and adequate support enabled him to achieve Level 5 SATS results. Although he was progressing academically, there were concerns that the transition to secondary would be difficult for him and he would struggle with the environment and general pace of mainstream secondary education without an EHCP.

My son started a mainstream secondary placement and the difficulties became apparent very quickly.  Aged 12, his anxiety became so severe that he was suicidal. He was so socially anxious that he was deemed too unwell and signed off from school medically by CAMHS, who actually stated that lack of support at school was the reason for my son’s ill health.  I made a parental request for an EHCP and so the battle began!

I spent hours reading the SEND Code of Practice and the Children and Families Act. Social media parent groups were my absolute lifeline. I began chatting with Nadia through one of these groups and although the distance between is hundreds of miles, we became good friends and SendNationalCrisis was formed.

A flawed system starved of funding

In just a few weeks, the group had gained thousands of members showing the true extent of a clearly flawed system. We have seen severe cuts; the largest in generations to education, health and social care budgets. Highly vulnerable children are being denied crucial services and provision.

We find ourselves in a process that is mentally, physically, emotionally, and financially draining. We are seeing loss of employment, remortgaging of homes, families and relationships destroyed, severe mental health crises, suicide even. All to ensure our children have their needs met and the support they are not only entitled to, but that they actually need.

The current SEND Code of Practice is nothing but an empty promise, whilst there is no accountability for the direct failings and discrimination we face trying to access our children’s  fundamental right to education.

We believe the current SEND Reforms 2014, are not effective and should be evaluated with parent/carer consultation. I once heard, ‘You can fiddle with the engine, shout at the mechanics, pour money down the drain, service after service, but if the machine’s broken, it’s broken!’ We don’t need more tinkering with the old system, we need a new system! Until there is a culture change, all the money in the world won’t change a thing!

There are planned marches rallies and family events across the UK on the 30th May to raise awareness of failings to those with SEND, their families, and education settings who are expected to provide an adequate education on continuous budget cuts.

We would like to invite parents, carers, young people, families, school staff and anyone else who supports this to take part in their local event.

We want to emphasise that the campaign has only gained its momentum and impact thanks to the relentless work and support of our volunteers and coordinators. All of which are directly affected by the failures of the system and have a vested interest in improving the system and reducing isolation and discrimination. Nadia & Poppy

Our Facebook page and group contain all the information about your local march  Group: SEND National Crisis March

You can also find SENDNationalCrisis’s website here and Twitter here. Next week, Siena Castellon is back to tell you why she’s joining the march too