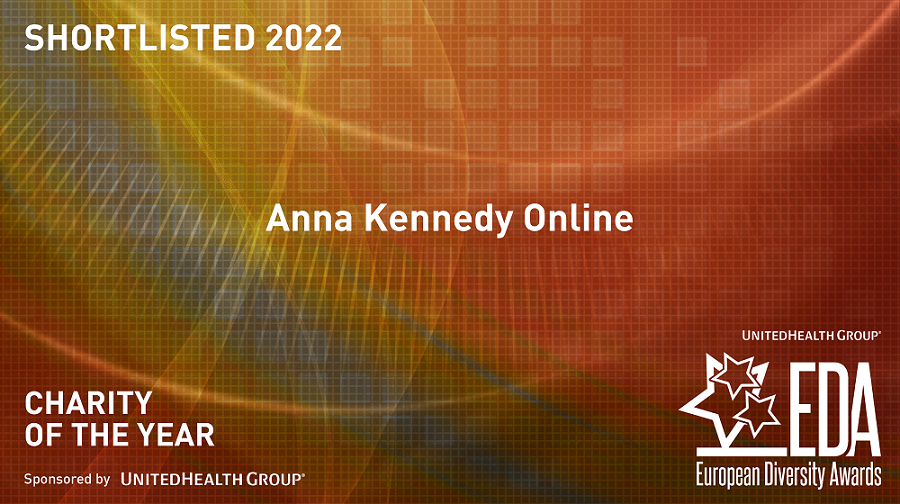 Anna Kennedy Online has been shortlisted for the charity of the Year category!

The European Diversity Awards will hold its 13th annual ceremony on 11 November and has released their shortlist of nominees; business leaders, companies, charities and inspirational individuals are all up for top honours.

The awards ceremony takes place on Friday November 11 at the InterContinental London Park Lane and will be hosted by BBC News presenter Jane Hill.

Headline sponsor, UnitedHealth Group is proud to partner with the awards to celebrate leading diversity and inclusion champions, recognising achievements over the past year across race, age, disability, sexual orientation, gender identity and religious belief.

In the running for awards are major companies such as PepsiCo, London Stock Exchange Group and SThree plc, all nominated in the Deutcshe Post DHL Group Company of the Year category, and exceptional European projects like the International Mixed Ability Rugby Tournament and Trans in the City, both nominees for the luluLemon Community Project of the Year honour.

In addition to being the headline sponsor UnitedHealth Group are also sponsoring the Charity of the Year category, and making a generous £5,000 donation to the winner; Hogar Si from Spain, Germany’s Der Lesben-und Schwulenverband and the UK’s Anna Kennedy Online are all in the running.

Amongst the individuals Amjad Khan of HSBC and Greg Turner-Smart of Rolls-Royce SMR are nominees in the Inspirational Role Model of the Year Category, whilst Pfizer’s Antonio Bebba and LSEG’s Isabelle Girolami are both contenders for the Abercrombie & Fitch Diversity Champion of the Year.

Begun in 2010, the European Diversity Awards has been promoting diversity and inclusion for over a decade, and as Europe emerges from the global pandemic and continues to tackle its aftermath, the importance of inclusion, particularly with regards to social mobility and LGBTQIA+ services, is of ever growing significance.

‘As Europe comes out of pandemic lockdowns and we start to see the repercussions of this, it is now more essential than ever to recognise those organisations, companies and individuals who persistently work to advocate and promote Diversity and Inclusion.

I am delighted that so many of these people and organisations have continued to show their dedication to Diversity and Inclusion throughout the pandemic, demonstrating the true strength of their commitment. I am particularly delighted to see more and more organisations doing more to support wellbeing, social mobility and supplier diversity in their agenda. In the last 12 months our nominees have realised great achievements, championing diversity of race, age, sexual orientation, disability, gender identity, social mobility or religious belief.

Our awards ceremony allows us to assemble and celebrate a truly amazing and inspirational group of people.’