World Autism Day – Is there racism in SEND? 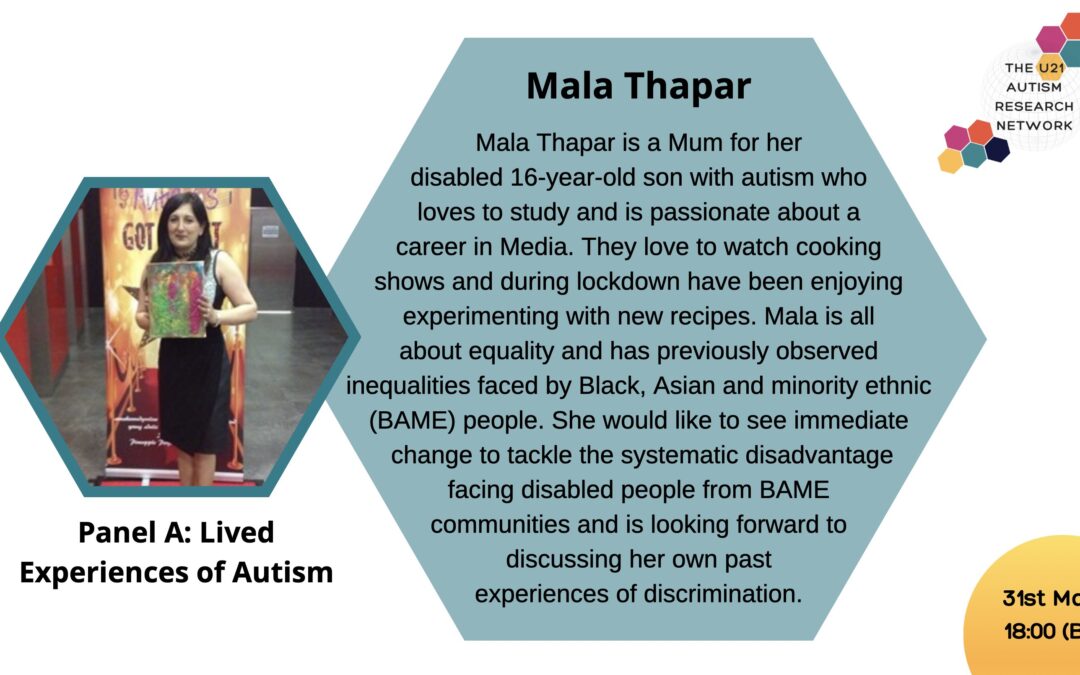 World Autism Day – Is there racism in SEND?

The U21 Autism Research Network talk to Mala Thapar our Charity Champion speaks about this important controversial topic!

Mala Thapar is one of the charity champions at AKO.

On World Autism Week she was invited as a panellist to “Let’s Talk About Autism: Diversity and Inclusion” hosted by U21 Autism Research Network, which is part of the Birmingham autism research consultancy committee. Mala is also part of this team, where together with the chair and a range of other autistic experts give advice to researchers on how to conduct their studies in an autism friendly way.

During this event, where over two hundred people attended Mala shared about being a British born Asian and her experience with racism over decades. She publicised “I sense racism immediately you can “see it” and disclosed how she was bullied at school and that not much had really changed.

Then she discussed her own personal lived-in experiences as a Mum of two Autistic boys, hoping that stigmatisation and society would have changed decades later but they had not for her eldest son who is age 16 had been a victim of racism at school, whereas her youngest son had never experienced racism within his school.

The chair asked her thoughts on the Race report which had been disclosed to the public earlier that day.  Mala commented “Where in today’s published report was there any reference to differences within SEND and racial disparities? by saying nothing speaks volumes”. She continued to tackle the topic of inequality in disability where racism plays a key part and there were public reports written that clearly reflect of the disparities, yet nothing is ever done about it. 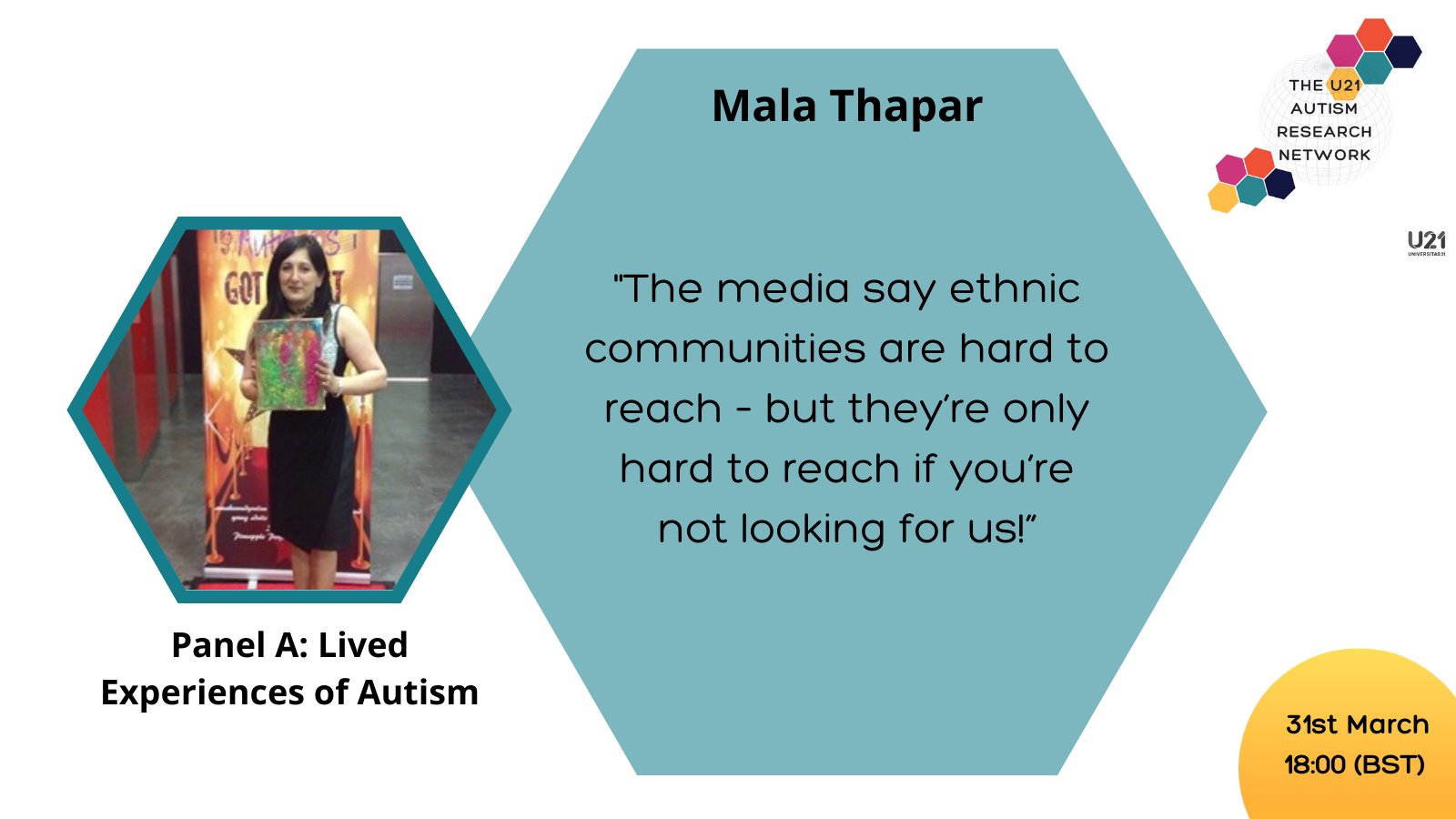 The panel and audience were in full agreement and she continued: “Support across public domains such as education, health, social and care practices could effectively reduce prejudice between the public and people with ASD over time. But how much time? Councils must have regard to a set of principles with the key goal being the best possible educational and other outcomes.

Being branded as a “difficult parent” and the access to support prohibits the effect of working together. “Ethnic communities are often referred to “hard to reach” but we are only hard to reach if you have not been looking for us”, referred to the set of principles set by the councils which is not being delivered and the disparities which leads to systemic racism set by their own conduct.

BLM was discussed and when asked about media coverage the panellist and audience listened with great interest on the documentaries aired, BBC’s “Small Axe” short film on Education which was based on a true-life story of 1971. Plus, the BBC’s “Black Power Movement”. Mala shared that after watching both that “not much has really changed in her opinion. Except when you have a disability and encompassed with ethnicity it is two protected characteristics that leads to two methods of targeting an individual in my experience”.

The next topic was based on barriers and conveyed how she contacted Anna in 2011 after watching her on TV. Anna visited the mainstream school where both her sons attended at that time. Anna raised Autism awareness, which inspired her after being supressed about keeping her son’s diagnosis a secret and feeling vulnerable for many years.

After meeting Anna and feeling strengthened after listening to Anna speak so passionately about her own two sons, which in turn empowered Mala and gave her a voice and courage to stand up to the community, which stopped the bullying for her son. Life was never the same again afterwards and thereafter joined the AKO team as a charity champion, which changed her life completely.

The topic of barriers continued as Mala voiced experiences of being subjected to five tribunals, the first one in 2014, the same year as the SEND reforms which was not complied with; the placement was then given and from 2015 to 2018 her son flourished.

The situation changed drastically in 2018 and had to face three more tribunals since June 2020 just to fight for her son’s rightful education. Mala expressed how unjust and prevalent institutional racism had arisen with unnecessary obstacles being placed to hinder her son’s legal right to equal education prejudicially.

Final thoughts were given on being treated with respect and dignity equally. How each CYP should be centre of focus, training to be enhanced. Joined up services without barriers to inclusion and red tape hindering access entitlements even down to a Blue Badge which are meant to be provided by the service providers.

Mala is so incredibly grateful for the opportunity from the U21 Autism Research Network.  A huge thank you to the team and the organisers of thus and also where she was encouraged to share her opinions about experiences freely without critique and looks forward to the next event. 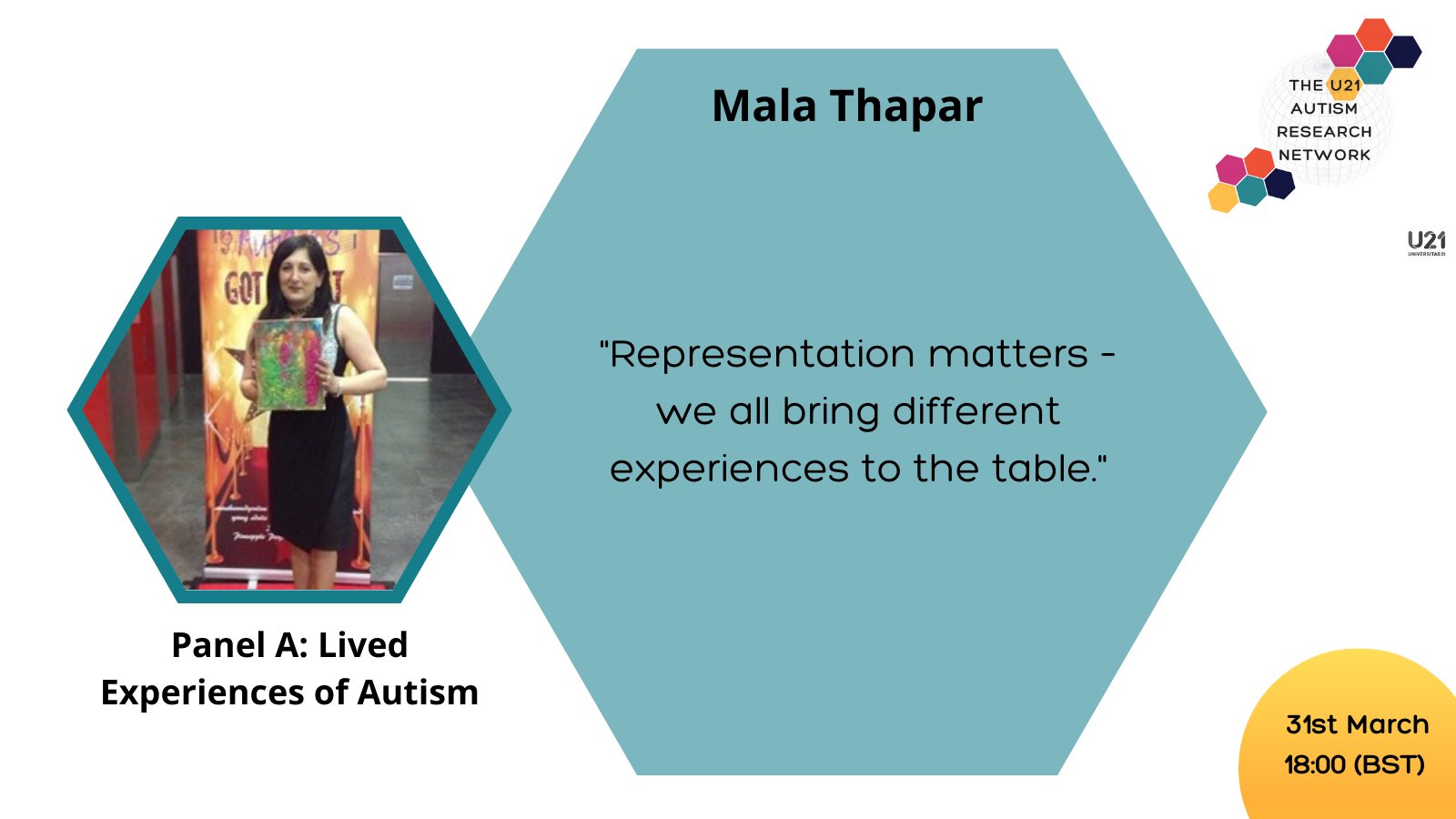 Please watch the video below which has the full coverage of discussions and as to how discrimination exists, with the effect to lived-in experiences, right the way through to research.

Off camera Mala had already disclosed her views with close friends on BLM and the impact of the last twelve months of heightened media coverage that shook the world and brought out the truth in her own life and to her eldest son.

The protests, the reactions of people and communities, encompassed with obvious segregation and people’s true colours coming out and finding out who was whom was indeed an eye opener or at least lifted the veil to what was clearly obvious all along.

Mala concluded “Race is a sensitive topic when the majority are too scared to speak out in case of being called racist. I have had my fair share of being called all sorts. Whilst the world had changed but for the better with the topic of racism highlighted systemic racism that needs to be spoken about, with encouragement without judgment”.

There are further details on the campaign “Autism and Cultural Issues” click here for details.

Share this:
Culture CampaignWorld Autism Day – Is there racism in SEND?